Such a terribly lonely place to be, yet I desire it so badly
I can taste the acrid smoke of want

Without all the work

You hung their field over the front door,
Austrian air captured in your vestibule,
the vast echo of a mountains voice
languishes, lush green beneath the Alps.

Grandad would leave as early as the milk floats
and I would see them ambling down, udders full
for the wooden stool, then drift back off to sleep
and dream the warm bucket onto the doorstep.

What tales you must have, secrets hand crafted
into curves. The village procession on fresh melt snow,
leading to the rich high pastures, this is where
we will go, beyond the suburban street lights.

Following your young herd, high on majestic peaks
I wait to catch your hollow sound as Grandad
gets in from work and shares his stories
about the cows he had to wrestle for the bells.

sleepy morning, spent
on chores put off
as long as they could be,
fixed between yawns and
cooling cups of French Roast
sweetened with real cream;
one by one, each
of my grown children
return to this empty nest
for Sunday dinner;
the menu is lasagna
and salad, served fresh
alongside a healing helping
of Mama’s love, and perhaps
a tiny bit of checking in
with each other
to be sure we’re all ok;
dessert and more coffee,
entire conversations
comprised of inside jokes
and two decades
of shared memory

I want to write about something else.
Maybe about the daffodils finally in bloom -
a flowery description of their sunshiney faces.
Or maybe about dad’s seashell collection -
whispers of his life before I came into being.
I’d like to write about piano keys
or soft doggy ears
or the taste of pineapple
or anything, really, that’s outside of myself --

But everything comes out tasting of tears,
sounding like echoes in an empty chest;
No matter how I try to steer my thoughts,
they turn back into this constant ache…
and I’m crying for scars I gained in the past
and I’m crying for friends I miss in the present
and I’m crying for losses yet to come.
I promised to keep my heart open, not closed,
but I’m crying, how long, Lord? how long must I cry?
And I’m trying to keep all my crying inside
so it won’t be alarming to those with dry eyes…

But the pain, this ache, just won’t come to an end
as long as there are people I care about,
And frankly it’s getting ridiculous now
The sky is still gray and I’m still full of fears
I’m going to drown in this lake of tears
And I just want to write about something else.

Delighting and cherishing the heat rays of those sunny days
Don't go cray cray or just lay down; throwing your crown away
Stay upright cause after dark nights the Sun's on the horizon
Use your 5G and hear me clearly as if I was Verizon


I know,
that you think you are smarter
than most people, brilliant in fact
with your mental heath education
but would you talk to me in jail?
would you take a trip to the ghetto?

Prolly not,
you are too full of yourself to notice
you’re the real problem
you are what's wrong with the world!

So,
while you're out doing what you do
trying to figure out the rest of the world
assuming and judging, you should know
it's people like you that make the rest of us
Crazy!!!

Awakened again by those thoughts that aren’t there
Seem to appear and disappear without much of a care
Unbidden untamed and wild as they can be
There is no end in sight of them at least nor for me
But what can I do when they are always within my reach
I cannot pluck each out in in doing so, teach
To only call when bidden and not a second before
Though with how they listen I’ll fall behind in score
Some days easier than others and others not so
Leave me no room to wallow and no room to grow

Selecting, by far, the longest line
ignoring all others much shorter
I’m unemployed, got plenty of time
to wait for my favorite checker

When ringing up my items, last visit
she greeted me like a friend, so warmly
In voice so exquisite with smile so sublime
today I’m seen through a darker lens
one that sees right through me
before, her face created sunshine
countenance now flat, demeanor surly

“Hello” I say, she mumbles a response
she thinks I’m vain because I bought croissants
nope, she saw that off-brand, looked at me funny
she’s convinced, I know, that I’m tight on money
damn, damn, damn I’ve done something else wrong
my life’s just as bad as a sad Country song

Easily sensing my obvious distress
she says “can you tell I’m depressed?”
then telling me she’d been up all night
because her baby had colic
and her husband’s alcoholic

Performing an intense operation
words combine in a surgical manner —
readers know not of the writer’s oblation,
the secret struggle and gestation

The journey is one the reader completes …
a single road offering many ways
where at the end a stretched hand smiles and greets
the traveler who dumps their burden, and sleeps

May the cold hearts find warmth
Under these hands

May the blind hearts trust
What stands before them

May the fearful hearts take refuge
In my arms

And may the angered hearts fall soft
In my embrace

Yes, I will do my very best
To shower endless love on every heart
The hurt ones cry in silence
Like flowers planted from sunlight
Such beauty will be grown, all I ask
Is you agree, to let my helping hands weed 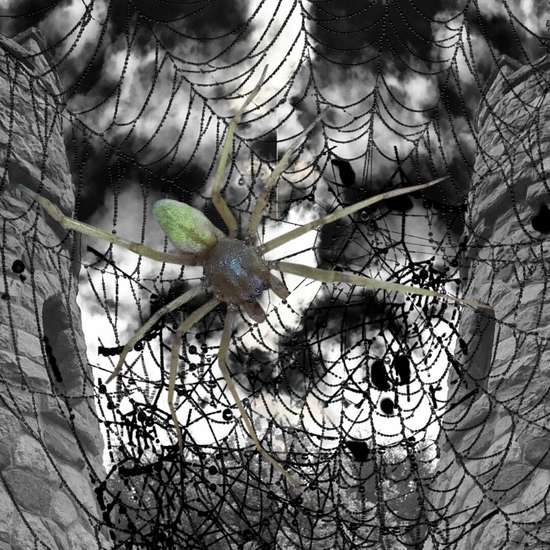 Sheila Lobelia and her crew were about to wrap up our Fellowshippers into fresh juice boxes when Ahavarwen blurted out,

The Sisterhood of the Eight Legged pants froze at the sudden outcry and looked up at their once upon a time Queen, who was nothing less than wide-eyed at the mention of the name. She blinked in Morse Code,

That name sounds familiar . . . It felt as if a fog shrouding her memory slightly lifted. He was my ... boyfriend?!

"YES!" everyone exclaimed in unison. The Spiders who, despite their hunger, were enraptured by the prospect of romance.

The great Eye of DUPon began to tear ( almost drowning Viddax who was stuck in the web directly below ). The memories came back to her slowly, until she finally remembered what the Dark Knight looked like: such a strapping hunk in those tights, the pointed rubber ears, the way he discoed in the moonlight and danced the Batusi under the stars . . .

"Help us be free of this web!" said Ganjosh. "Then we'll help you find him!"

She blinked wildly in agreement. Sheila and her crew clapped their mandibles excitedly and went straight to work on pulling everyone free. Then the Eye of DUPon was loaded onto a wooden cart to be pulled by several of the Donkeys.

In gratitude, Rosie Grace gave each of the spiders a basket of blueberry muffins and a recipe for the most dynamite Bloody Marys.

"Which way do we go now?" asked da_poetic-edifier after that harrowing escape.

"We head straight for that volcanic mountain spewing flames and noxious fumes," said P'Radriel, pointing to the East.

"Or, we just follow the shrieks," Lord Melrond added.

And the shrieking of the Nasty Ghoulies was relentless as they galloped back to the armor plated, spikey gated community of Humbug. Their miniature midnight steeds were tuckering out. They would search for The One Poem ™ from the skies instead. It was time to saddle up their awful, dragon-winged Smelly Beasts!

But first, at the guard shack, the Ditch King swiped his badge through the card reader and entered his 4 digit PIN code. The security in his kingdom was so tight that even he was subject to random body cavity searches. Then they disappeared through the metal gate that was briefly opened.

The Dark Knight listened intently, then sighed in relief. The Poemwraiths were travelling away from them. They could breathe more easily now. It was slow going through the Dreaded Marshes, but they were making better time than if they had gone around.

DUGlo was alarmed when he came across a face in the water staring back up at him. "Who are these people?" he asked hesitantly.

The Dark Knight explained, without slowing down. "The bodies here have been preserved by these boggy waters for thousands of years. They were the Numeralians, Men of the West who fought MOAR!ON's armies and drove him into the East. Most of their race is extinguished and without a king to lead themthese days."

The Glowyrm thought of all the NaPoWriMos that were held before and after MOAR!ON's reign of terror, thanks in part to these brave, fallen soldiers. It put things into a sort of perspective. This was history they were travelling through. And its future depended on the outcome of their quest.

DUGlo was really just a little fellow, in a wide world after all. 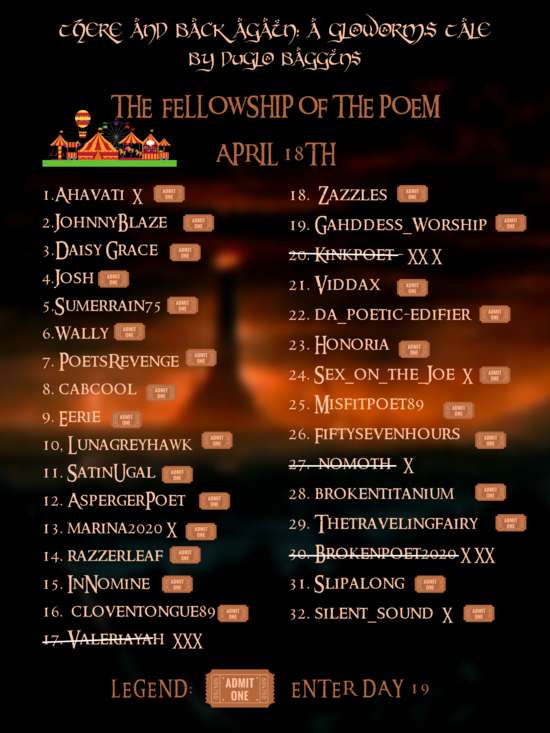 Greetings, Fellowshippers! Apparently a carnival is held on the outskirts of MOAR'DOR each year. You can't have a day off, but you can have a day of fun if you have a ticket beside your name! We'll be meeting at the Ferris wheel at midnight to continue our trek!

Yet, exalted Venus follows suit
provides the flicker of love—
we become receptive
deeply intuitive
absorbed in forms of art
distracting us from hunger
gnawing our spirits bare

Wolf Spirit resonates
and resourcefulness arises
from hymnals of heart: