because they're outta control  ...or controlled

Thing is, and not to take away from the murder, because it was blatant state murder, not a sign of remorse on the cops face  ..looked kinda indifferent sometimes

I wondered though, if some of the guys recording could have rang a fkn ambulance, might have made a difference


that said, I've read the guy's brother is calling for the death Penalty for the two

have to say, whatever about the guy with the knee, the other cop who tried to crowd control probably doesn't deserve to die for his ..imma say cowardice because that's what it looked like

Joined 31st May 2012
Forum Posts: 263
Cops in USA do not work for the citizens like our municipalities would like us to believe.
Excessive force is out of control.

Yes. Someone should have called an ambulance, or the crowd could of made a conscience decision to rush the police.
They cant shoot everybody.

Knee cop should get the death penalty.
Would send a clear message "we the people wont take this kind of shit"

I think police brutality is everywhere  but most are hidden from public eyes. I believe they should face the law for what they did, especially if their actions cause anyone to lose their life, and in situations where the police  didn't have to use accessive force.

Joined 3rd May 2018
Forum Posts: 1203
Sadly, brutality like this happens often and sometimes it gets broadcasted by the news but most often its swept under the rug.  There will never be a long term solution cause the law will always be behind the law itself unless its publicized like in this situation.

Joined 29th July 2018
Forum Posts: 244
Both cops have had multiple excessive force issues in the past. Cops in the US operate with absolute impunity. The good old boys club ensures that no one rats. When you have 10 bad cops and 1000 “good” cops turn a blind eye and keep their mouths shut, you don’t have 10 bad cops, you have 1010 bad cops. What really slaps the icing on the cake is taxpayer money funds the salary and pensions of these pieces of shit.
Several hours ago the governor signed an executive order to bring the national guard to keep the peace. Shit is a ticking time bomb in this country. Violence is never the answer, until it is, and citizens of this country are fed up with police operating above the law.


"Creation which cannot express itself becomes madness" ~Anais Nin
Posted: 29th May 2020 4:05am

Joined 3rd May 2018
Forum Posts: 1203
What's bad is that we already had protestors all over the country, primarily in the major cities over the Covid19 quarantines to open up businesses and now this situation, everything was tense now something like this erupts complicating things further.

Thanks ladies, all very good points

fair enough, even here in the back arse of the north Atlantic there are cases of police brutality and some of people dying in police custody, I'm sure our brothers and sisters across the irish sea experience the same thing only amplified a bit


that's fair enough, I think perhaps the majority of people accept that the police force, or to have a police force means there will be some collateral damage. the alternative would probably be much worse

can't help but think: for all the verbal coming out of the onlookers they were technically complicit in the murder. if something like that happened between non police and people stood around recording it there would probably  be charges

there is a good samaritan law in some countries, varies from nation to nation. pretty sure US has the law too.

one solution might be to tweak that law to allow civilians to interfere and stop police brutality when it happens, though it would have to be a well written and clear piece of legislation so it doesn't get abused

also, given we already know this has been going on for years, why isn't it a thing where in communities that have a large percentage of minorities the police force is representative of those minorities


At the end of the day, I'm not sure blaming the police is right. I mean yes, a policeman done it,  committed murder for everyone to see, but it's been going on for years, theres been countless people murdered by police

they are your police force after all, if you made them change, they would change. just isn't enough people wanting it enough

Thing is, and not to take away from the murder, because it was blatant state murder, not a sign of remorse on the cops face  ..looked kinda indifferent sometimes

I wondered though, if some of the guys recording could have rang a fkn ambulance, might have made a difference


that said, I've read the guy's brother is calling for the death Penalty for the two

have to say, whatever about the guy with the knee, the other cop who tried to crowd control probably doesn't deserve to die for his ..imma say cowardice because that's what it looked like

Agreed Nikimoe
It's not the duty of the cops to protect the people . They protect the corporation
The U S. Is not sovereign it is a Corporation It is not a real person but only an idea.

There are so many different ways these cops ,authority in general violate us daily

Did you know that when you are arrested the officer must show you the arrest warrant with a real signature on it along with an affidavit?
Never happens, if you are arrested without affidavit it is considered false arrest
battery.”  State v. Robinson, 72 Atl.2d 262 (1950).

The arresting officer should have one goal that is to take you before the judge with arrest warrant and affidavit No picture , no fingerprints, no handcuffs unless you tried to avade. Osborn v. Veitch 1 Foster & Fin Eng Rep 317.
Picture before conviction is an illegal act.” Hawkins v. Kuhne, 137 NY Supp 1090, 153 App Div 216 (1912).

Without proper paperwork it is considered false arrest a tresspass a violation unlawfully deprived of your liberty and you have every right to protect yourself
It would be self defense if you were to fight back against anyone who tries to deprive you of your liberty even to take their life
State v. Gum, 69 S.E. 464 (1910).
Columbus v. Holmes, 152 N.E.2d 306 (1958).


Cops cannot control you but they do 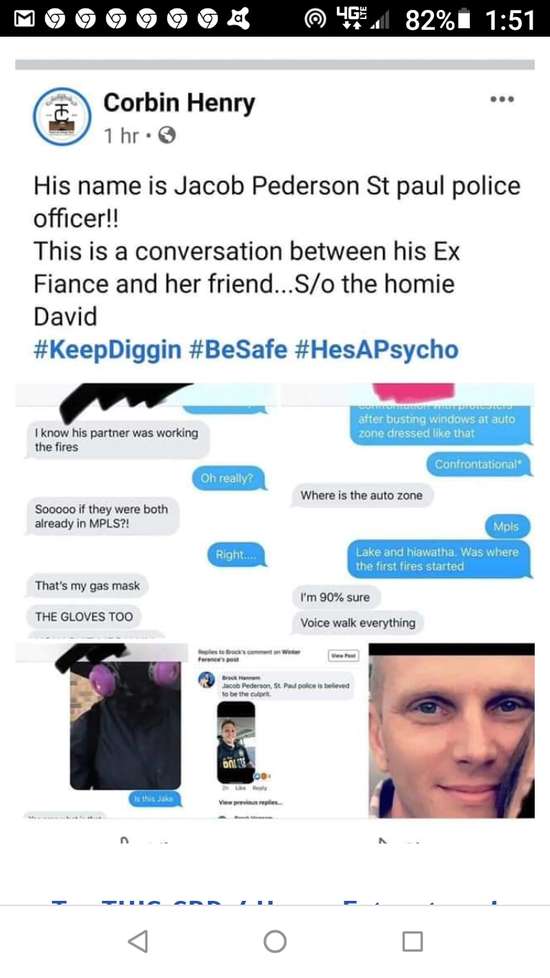 Former vice president Joe Biden said he is "furious" over President Donald Trump "calling for violence against American citizens" during the protests in Minneapolis over the death in police hands of a black man, George Floyd.

Agent provocateur is tried and tested thing at this stage. makes sense, I tell ya lady, society is gone to shit if you cant even trust your fellow protesters not to be the feds


burning and looting is a great bob Marley song, but it's very counter productive in those kind of situations. I think, what may push the balance a little bit is the fact that it's an election year

African American vote is a decent enough chunk. enough to make a difference.

looking at the tv earlier reminded me of South Africa in the 80s. the big nations eventually put pressure on SA government and it made a difference


It would be nice to see hundreds of thousands (keeping social distance) on the streets all over the world to stand with and for those who are the victims and future victims.

I wondered if anyone would bring it up in the UN, call for a special sitting. figured if someone did, Trump would just leave and start his own UN type thing only more betterer

is Minnesota a death penalty state ?

By the way , there is video showing three officers kneeling on him
all at the same time , with one on his neck , yet they were not
arrested at this time...