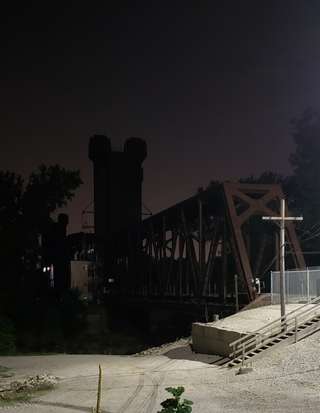 I was taking a crew out for a dogcatch.   That's where a train engine has stopped because the crew has reached thier driving limits, set by the government.

I bring in a fresh crew, and take the old one back home to the train yard.  Train folk live in their own world,  and they have thier own set language.

It was 2 in the morning, and we were headed to the Village of Birmingham cross.  There was a train waiting there for us.   A dogcatch is what you call it.   We had a stop to make first behind the Ameristar.

The engineer said he had to grab some papers that was waiting for him, there at that cross behind the casino,  no longer in use anymore, and then head on over to Birmingham.  He said it couldn't be avoided,  the orders came from the top, and those papers had to go with him to Wichita.

Way behind the casino, dark and bare,  down by river, there I was; I had to drive an engineer & conductor to that cross, at 2 in the morning.

The roads were rough and full of ruts, and there was only one way to get back there,  and back out.

I saw them in the headlights,  hundreds  of them.   I said, oh my God, what is that I'm running over.  He said, it's frogs,  just keep driving.

It was horrifying.  I have to live with myself over it.   I honked the horn, in vain of course.   Im sorry that I had to tell you that story.   It makes me very sad for the frogs.

I can never quite describe that sound that a frog makes.   I hear him down there tonight in the Koi pond,  and it sounds very honkish.  No, ribbit, ribbit, at all.

Written by Pishashee
Published 7th Apr 2021
Like This?
Poems by Author
Comment
#emptiness #regret #sadness #shame
All writing remains the property of the author. Don't use it for any purpose without their permission.
likes 1   reading list entries 1
comments 3   reads 85

Commenting Preference:
The author is looking for friendly feedback.
Re. Hundreds of crosses, hundreds and hundreds of them. .
Zazzles (Broom)
7th Apr 2021 7:34am
Keep writing young lady you have talent and I miss you🌹🤗♥️
Always
Jackie