why do people go to war?


-DARING WARRING AVATAR
“Liberate from Fears
Know the Contempt & Injustice meted out
Rise to the ace of mutinous Revolution
Bear, Raise the Weapon of it all
As if you bare it All
In the raging face of War”

Why do people go to war?
Hell if I know, it's all the
same old mess, money
and women, oil and
whatever else there is to
fight over these days. As
long as I'm left off the
bloodshed's list I can live
with whatever the
circumstances are. I have
enough problems to worry
about these days than what
a few certain individuals are
trying to claim these days. I
guess I'm the same way, I'll
go to war over a woman
any day of the week, but it
all depends on the girl I
suppose.

Do you fight for justice or peace?
Either way it’s a crease on society
You claim it’s propriety
So the uninvolved suffer.
It doesn’t absolve them.
Were they so innocent?
Standing by absent of the evident.
That you must fight for justice
Not everyone can live in bliss.
That you must fight for peace
To police the violence.
Or stand by an get trampled
Do not become the example.
Written by Ljdynamic
Go To Page


I understand the rules, simple enough for a 5 year old to understand.  I did use some words not in every 5 year olds vocabulary but I really wanted to enter because I liked the finished product.  Thanks

The devil started war on earth
When Eve and Adam ate the fruit.
That serpent did not tell the truth:
He wanted them to doubt God’s worth.

Though Adam tried to blame Miss Eve,
The two had disobeyed God’s rule.
Their lives could not again be cool,
For they had sadly been deceived.

Because of Satan’s big, fat lie,
The pair was from the Garden sent
Till they were ready to repent:
The soul that sins shall surely die!

Although the sin that Adam did
Distresses people everywhere,
Forgiveness waits for those who hear:
Do not the things that God forbids! 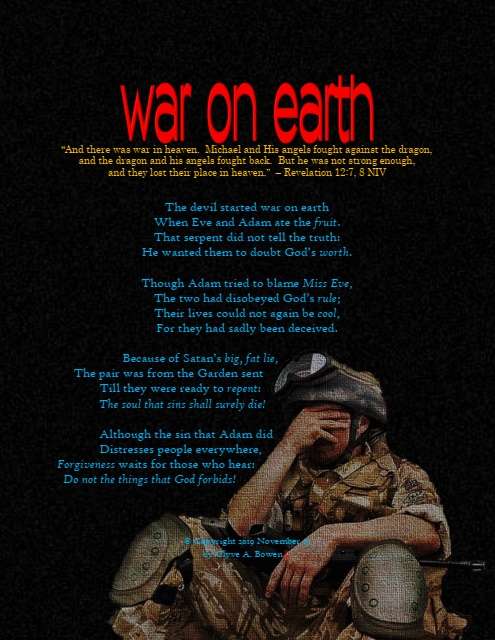 Well, it's like an Oreo
and chocolate chip cookie
arguing over whose chocolate tastes better
because they're different;

or, an apple and orange
fighting for control
of the fruit bowl

Because each one thinks
they’re the fruitiest of the lot

Tell me what you think

See how smart you are?!

Can I have a banana now?

~
Written by Ahavati
Go To Page

congratz Ely (E.A.Rothwell) for the win, would love to thank host adored poet friend cold_fusion (hope you are doing well dear, wishing health & peace)  for a timely & thoughtful comp. ... striking reads all throughout by everyone who entered.. thanks to you lovely DUs  who voted & Web Mistress for the results. glad to be mentioned as runner-up. Light & Love ev DUz

Thank you, fuze (cold fusion) for holding this comp...and thanks to all who read and voted...
and last of all, thank you to all the things others who participated and made the contest even more worthwhile... many hugs for you all...Ely