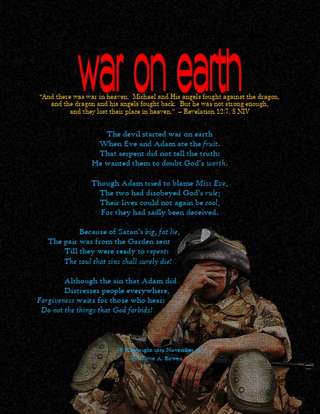 The devil started war on earth
When Eve and Adam ate the fruit.
That serpent did not tell the truth:
He wanted them to doubt God’s worth.

Though Adam tried to blame Miss Eve,
The two had disobeyed God’s rule.
Their lives could not again be cool,
For they had sadly been deceived.

Because of Satan’s big, fat lie,
The pair was from the Garden sent
Till they were ready to repent:
The soul that sins shall surely die!

Although the sin that Adam did
Distresses people everywhere,
Forgiveness waits for those who hear:
Do not the things that God forbids!

Written by cabcool
Published 25th Nov 2019
Like This?
Poems by Author
Comment
#forgiveness #morality #redemption #war
All writing remains the property of the author. Don't use it for any purpose without their permission.
likes 2   reading list entries 1
comments 4   reads 91

Commenting Preference:
The author encourages honest critique.
Re. war on earth
Tallen (earth_empath)
- Edited 26th Nov 2019 00:44am
25th Nov 2019 7:07pm
Not certain why, but this spill had reminded me of a picture i made for a church in southwest San Diego, CA (they contracted me to do several pieces back in the late 1980's).
It's a Demon-like Dragon holding 2 halves of earth in his hands, red liquid dripping from the halves and his mouth, and the reference 1st Peter 5:8, centered near the bottom.

Weird, right, how words cause one to remember such times?

I have not forgotten you:  it's just that I'm taken up with a special Toastmasters project (teaming with the blood bank to do a collection drive).  It means working with many individuals and groups as well as hosting meetings, doing site visits, etc.

Thanks for your continued support and your reflective insights that take you back to your own former days of being emersed in the Holy Scriptures.

Although I am only now responding, YES, I've been waiting to see your piece of art.  Your scriptural recall is amazing:  do these references (such as 1 Peter 5:8) just jump out of your head?!

By the way, I wrote this piece for a DU competition upon coming across the opportunity 2 hours from closing time.  By the time I posted it and went back to add a pic, the "Competition Closed" caption loomed in my face -- but the pic still attached itself!

& on my own i worked with many Homeless on the streets of San Diego, CA -- mostly in the community i lived in.

& YES!!
the spirit (Holy Spirit or universal source)
draws forth the verses!!

music and biblical verses immediately pop into my mind sometimes

I'll see what i can do to show You some of the drafts out of my book that i took to clients to view before they purchased the pictoral ideas.
Back in the day,
i was freelancing for 3 churches and also did many pieces for several Tattoo shops and their clients, as well as, selling unframed pieces at the weekend Swap Meets.

Re: Re. war on earth
cabcool
22nd Dec 2019 1:37am
I daresay, you've had the experiences that count for much where life matters!  I imagine you passionately wanting to connect with the needs around you, giving of your all to change the lives of those around you.

Your solid grasp of Biblical truths and principles still reside in your depths and propel you forward with a heart that seeks out the good of others.  I should know:  I'm a humble beneficiary.

I used to draw too and I'd love to see your sketches where/when possible.  But take your time don't let me add any further pressure to your efforts.