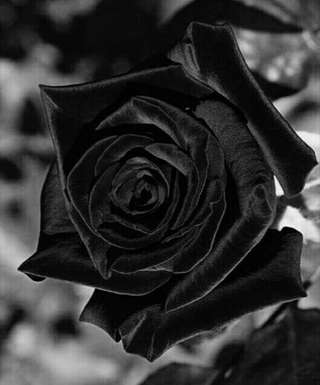 To fall asleep was all she wanted. Weeks had passed and still nothing. She lay there waiting impatiently for her eyes to close, for the pleasant drifting sensation she hadn’t enjoyed for such a long time to creep upon her. Her only company was the weary beating of her heart, thumping away with a monotonous drone with nothing else better to do, the faint hiss of her breath seamed void of the will to live.

With the bright full moon shining in through the large glass conservatory everything was illuminated with its pail blue glow, the sparkling glimmer of the razor sharp knife on the kitchen top caught her eye in the darkness. The thought of death drifted through her mind as it had many times over the past few weeks. The cutting edge shone as a guiding light leading the way to freedom. The luring idea of eternal rest was tempting, just a moment’s courage, a moment of pain and sacrifice for her suffering to end.

With a tear seeping from her eye she reached across the bed, the empty space beside her. The strength of her loss was growing with every passing day, re-enforcing her intolerable loneliness. Everything touched by the light of the moon was wrapped with hoards of memories that danced passed her minds eye as a ballet of ghosts, a never-ending performance of the life she used to live. They seamed so close she could almost relive them; almost believe that they were still together. She would give anything; sell her soul to hear him whisper those sweet little nothings, to feel the tender touch of his loving kiss against her lips. He was her prince of darkness; she was his little black rose.
She rolled over, tried to make herself comfortable, and stared at the low moon through the conservatory windows. The beautifully clear night sky enabled it to shine brilliantly and the surrounding stars twinkled with hypnotic grace.

The conservatory it self was yet another reminder of him, as well as the black grand piano housed within it. As her eyes fell upon its highly polished surface, reflecting the moonlight like beams on still water, she remembered him sitting at its keyboard, playing the music of Chopin, Beethoven and other masters of romantic melodies. Every time he would play she would dance naked around the room, possessed by the sounds he produced. He would pick her up in his arms, carry her to the bed and they would make love until the sunrise the following morning. The memory played in the back of her mind, echoing through her soul, delivering the only feeling of comfort she had felt for a long while.

Her sobs were such that she was gasping for breath. Her body and soul felt hollow without him, an uncontrollable need for his love that could not be satisfied by any means. She sees him everywhere, haunted by his memory to bring her life to a standstill, her head a swirling mess of images and sounds, music, laughter, tears and pleasure, circling faster and louder. Her eyes focus on that shining blade. Never before was the temptation so real.

A noise caught her attention and a faint breeze brushed past her face. She was puzzled as there were no windows open on this bitterly cold night. She raised her head to look around and in the darkness there seemed to be an object on the piano just over the keyboard. The noise she heard sounded like one of the keys being pressed. Slowly she got out of bed, wiped away the tears, and cautiously approached the piano. She couldn’t help feeling that she wasn’t alone, and the cold air touched her bare skin with sharp pointy fingers.

The object on the piano was long and dark with an odd shape. She turned on the light, and was shocked to see that the object was a small black box in the shape of a coffin. She had never seen it before and could not imagine where it may have come from. As she drew closer she saw that the keyboard cover was open. It hadn’t been opened since the last day he played.

Although scared, she carefully reached across the piano, picked it up and lay it down gently before her. She delicately lifted the lid and paused, fearful of what it might contain, then slowly moved the lid away. Inside it was lined with pure white silk. Her heart fluttered as she gazed with tearful eyes at the object placed upon it. It was a single black rose.

She dropped the lid to the floor, and gently lifted the rose from the coffin. It had an unusual perfume, its thorns were as sharp as the kitchen knife and its two leaves were a dark rich green. But where could it have come from? Not since the last time they were together had she felt his presence so strongly. She could literally feel his arms wrapped around her waste, his bare chest pressed against her back, his long hair brushing down her arm and his hot breath on her neck as he kissed her so gently. She could still hear the music he played, she could hear his voice speaking softly to her, ‘you are the light within my darkness, you are the fuel that feeds my flames, you are the soul that brings life to my body, you are the blood that flows through my veins.’

She reached her arm up to run her fingers through his hair as he playfully nibbled her neck and caressed her breasts. She dropped the rose back into the coffin and turned to embrace him… but she was alone, the heavy quietness broken by the beating of her heart and resonating chords from the piano fading into silence, but still she felt his presence.

She fell to her knees and wrapped her arms around herself. Only now could she finally accept that he was gone, but only in body. He vowed he would always stay with her, even if it were from the grave.

With the tears still streaming, she carried the rose with her to the bed. She placed it beside her where he would normally sleep, and finally, finally, she drifted, enjoying that feeling she hadn’t enjoyed for such a long time.

Written by Lord_Stabdagger (Lord Stabdagger)
Published 10th May 2020 | Edited 22nd May 2020
Like This?
Poems by Author
Author's Note
The first story I ever wrote.
Comment
#emptiness #grief #heartbroken #loneliness #love
All writing remains the property of the author. Don't use it for any purpose without their permission.
likes 5   reading list entries 3
comments 8   reads 145

Commenting Preference:
The author encourages honest critique.
Re. Black Rose.
Twitter
12th May 2020 1:39am
This is a masterly great piece of prose. I really, really enjoyed everything. The story, the structure, the wordings. I liked it very very much. Thanks for posting it here.

Read poems by Lord_Stabdagger
Re. Black Rose.
Anonymous
12th May 2020 11:26pm
This was worth reading for sure. You've got a lot of talent for writing stories. I'll be reading more in the future for sure.

A couple of typos:

She could literally feel his arms (wrapped) around her waste,

Re: Re. Black Rose.
Lord_Stabdagger (Lord Stabdagger)
13th May 2020 7:16pm
Thanks very much. I have dyslexia, I know its not an excuse, I constantly work to improve in every way but sometimes one slips through. I rely heavily on spell check but its surprising how often it makes its own mistakes.

Read poems by Lord_Stabdagger
Re: Re. Black Rose.
Anonymous
13th May 2020 7:39pm
For someone who has dyslexia, you do pretty damn good, my friend. Keep up the good work.

Re: Re. Black Rose.
Lord_Stabdagger (Lord Stabdagger)
3rd Jun 2020 6:10pm
I aim to please and entertain so future worlds will know my name.

Read poems by Lord_Stabdagger
Re. Black Rose.
Onnakiller (Killaonna)
10th Jun 2020 6:17pm
CHILLS, reminds me of someone close to my heart!❤