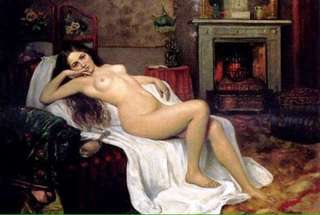 
there are places that a sullen drifter should not go, things
he should not do. circumstances afford temptations, & a
man is no more, & no less, than a man.

it was a bar like any other bar in these crude towns. the music
had a moody tranquility. whiskey was disdainful in glass bottles
with foreign labels, & the women were for sale.

the girl I chose had pale skin & long black hair; to say her hair
was like strands of silk is artlessly cliché, but there is no other
way to describe it. her features, which did not bear the spectral
bruises of coarse, bearded sodomizers, made her seem out of
place in this den of whores.

the room at the old hotel had three grey, bleak walls, but one
wall was white, as if it had been bleached. in the bath, she sat
on the commode by the sink & washed my erection with a damp
cloth & brown, porous soap. her hands were gentle, angelic.

she lay on the bed quietly, like a soft, sensual mannequin, for me
to abuse. my hands roamed smoothly over her breasts as my
finger & thumb nipped the timid garnet swells. I barely noticed
hues of green & blue seeping from the upper corner of the white
wall, like liquid leaking from a cracked vase.

she remained silent as I kissed her porcelain neck & shoulders,
feeling her belly & the down-covered treasure below it. bands of
yellow streamed upon the wall from the right, wands of a distant sun.

she parted her legs & made the slightest sounds as I entered her
tight corridor. she moved her arms to caress me, & in the dance of
our thrilling friction, great splashes of red & shades of violet sprang
up in the wall’s white center, like demented roses.

more intense were my movements now on the flesh of this girl who
seemed to be in the grasp of her sexual awakening. she held me
firmly as she received the flooding torrent of my passion. & the
canvas wall was a vibrant tapestry, a field bloomed into magnificence.

we had done something that went beyond sex:
we had made art!

but this girl, who had made love like a woman, was perhaps a year
(or more) from being a woman. I felt that I had defiled this beautiful
maiden before her time. she was too young; she was too young!

she bled on the bed…

Written by JohnFeddeler
Published 3rd Jun 2016
Like This?
Poems by Author
Comment
All writing remains the property of the author. Don't use it for any purpose without their permission.
likes 16   reading list entries 4
comments 15   reads 931

Commenting Preference:
The author encourages honest critique.
Re. Traviata
crimsin (Unveiling)
3rd Jun 2016 5:39pm
John you always know how to set the scene so artistic is your pen..

Re. Traviata
again
3rd Jun 2016 6:55pm
u were so lucky to have a virgin so early
i thought she was still like a mannequin

Re. Traviata
MayRayn (May Rayn)
3rd Jun 2016 7:13pm
A beautiful prose poem, a gentle mood set against the sordidness of the whorehouse.

I am curious about your choice of the title, presumably the name of the young virgin whore, Traviata - it may age me but it puts me in the mood of La Traviata and La Dame aux Camellias, of course (most may miss that reference). But neither the opera nor the book had a virgin as their protagonist, although of course the protagonist Violetta must have been a virgin once... At any rate, just wondered - the title, for those who know the reference, is somewhat misleading.

There are some beautiful images in it, rendered very sparingly, and I like the interposition of images of the narrator and the girl with images of the setting in which they consummate the deed.

"whiskey was disdainful in glass bottles
with foreign labels, & the women were for sale. "

There are two lines that stand out to me like a sore thumb, however:

"we had done something that went beyond sex:
we had made art! "

In my view, this conclusion would be best left to the reader, and unnecessary.

*Note that given your invitation of honest criticism, and my liking of the poem, encouraged me to leave my honest thoughts on it. They are not meant to offend.

Re: Re. Traviata
JohnFeddeler
4th Jun 2016 4:03am
I borrowed the title from 'La Traviata,' I wanted an exotic title that would be in stark contrast to the crudeness of the encounter. as you know, the opera concerns a courtesan, also a glaring contrast to the humility of my pretty harlot.

the washing scene is commonplace in the world of purchased sex, which most often includes a condom. but a condom is so un-poetic.

the lines you reference were included to establish the importance of the wall (or the shock of it) which became a mural. I would not have been comfortable without those lines.

Thanks for the time you spent with this, your comment is entirely wonderful...

Read poems by JohnFeddeler
Re. Traviata
crowfly
3rd Jun 2016 9:34pm
She could certainly do worse than having you for the first time.  You're a luckier man than me, or more skillful.  Fine job in any case.

Re. Traviata
jemac
3rd Jun 2016 11:50pm
your words paint the most vivid pictures JohnFeddeler ... leaves one spellbound, no matter the content ...

Re. Traviata
Anonymous
4th Jun 2016 3:54pm
This is classy, ambiguous, beauteous. The setting is wonderful. This poem, JF, is a wormhole. It transports the reader into another time period. I was in Italy, pre-war. Your initial stanzas reminded me of Tornatore's Malena. The white wall is the high point here. The splash of colours and passion on it and the contrast of the man and the girl makes for some astounding imagery. Loved it all the way. Especially 'demented rose.' It reminded me the ever-changing monochrome of Rorschach test.

Thank you for the read.

Re. Traviata
Anonymous
9th Jun 2016 4:22am
Sir John, you have orbited us with art in many ways more than just one, as always your own does....loved these lines....

"she held me
firmly as she received the flooding torrent of my passion. & the
canvas wall was a vibrant tapestry, a field bloomed into magnificence.

we had done something that went beyond sex:
we had made art!"

Re. Traviata
case28 (Alexander Case)
12th Jun 2016 3:39pm
Bohemian sex with a mildly sinister edge. I liked the description of the bleak setting, which seemed to draw attention to the girl's coldness and absence from the scene e.g. mannequin, porcelain. Cool poem, Feddeler. I enjoyed the darker side of reality.

Re. Traviata
Kasai
10th Apr 2017 5:49am
The making of fine art is like nothing else,
going beyond all things beautiful,
becoming something much more.

The way you've captured the emotion of it all
is in itself, art. Exceptional on so many levels, John...