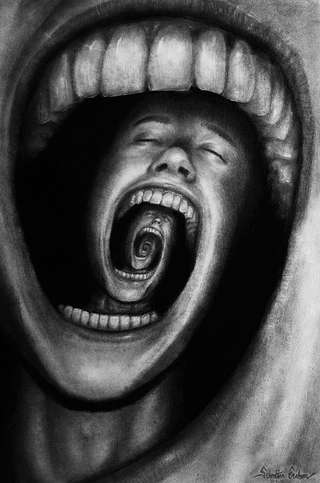 Sometimes words are just not enough!
Sometimes actions are futile in the need for extreme expression!
In those moments when there’s not enough things to brake!
When no amount of profanity can justify the chaos raging inside!
Those moments the Incredible Hulk would run away and hide!
The only recourse of action is to burst my lungs with an inhuman amount of breath!
Break the sound barrier with a scream equal to the loudest bang at the beginning of creation!
A scream that can shatter the planet to rubble and throw the other ones out of orbit!
A scream that will shatter the windows of heaven and cause earthquakes and volcanoes in hell!
A scream so loud I spray blood from my mouth!
A scream so loud my demons cower in fear begging for my mercy!
A scream to end all shit!
To end the shit that’s rained down on me!
To raise the dead and make them pay for their sins against me!
A scream to realise that in spite of it all, nobody gives a fuck!
No matter how bad someone else has had it worse, so shut the fuck up and suck it up!
So into the bottle it goes along with all the other bullshit!
The lids on tight as it should be, but it’s running out of space!
One day it’ll burst!
The shards will fly and the edges will cut!
They’ll see what they’ve done and they’ll blame it on me!
It’s all my fault!
Of course it is!
Who else is possibly responsible?
Keep it all in!
Keep it all down!
Don’t give in!
Be the better man, and continue as normal.
The scream is contained, so loud nobody can hear it.
Nobody but me.
Just like the screams inside everyone else.
One day the bottle will break.
And I don’t want to be around when it does.

Written by Lord_Stabdagger (Lord Stabdagger)
Published 29th Apr 2020
Like This?
Poems by Author
Author's Note
Those moments.............
Comment
#anger #dark #disappointment #frustration
All writing remains the property of the author. Don't use it for any purpose without their permission.
likes 2   reading list entries 2
comments 5   reads 287

Commenting Preference:
The author encourages honest critique.
Re. Deafening Silence.
Lazy_Dead (.Julia.)
29th Apr 2020 10:23pm
This speaks to me. I can relate so much.

Thanks for the comment. Its good to know I've managed to touch you in a similar way as you have struck a dark chord within me. The darkness can be a lonely place mainly because we can't see the ocean of others who are there suffering and screaming along with us. Reach out and keep reaching, when you finally grab someone by the hand hold on to them for dear life. Friendships formed down here are the strongest you'll ever know.

Re. Deafening Silence.
NBathory (Natalia)
3rd May 2020 1:51pm
Really enjoyed this one.  Sometimes words or not enough indeed and other times there are far to many of them. In any case, I could really feel the internal turmoil.