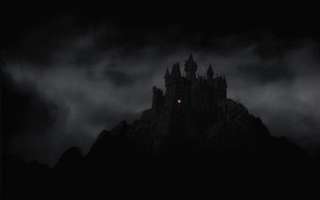 By day the castle sleeps,
By night the spectre creeps,
The werewolf prowls the streets,
While the lonely banshee weeps.

The graveyard mist will crawl,
While the werewolf’s jaws will maul,
The vampire climbs the wall,
While both good and evil brawl.

The vampire’s victim screams,
While his eyes with pleasure beams,
Is nothing quite as it seems,
When the devil haunts your dreams?

The zombies from their tombs emerge,
While terror down your spine will serge,
Innocence with lust will merge,
While tempted by unholy urge.

The demons roam the minds of man,
While causing all the hell they can,
Possessing those they cannot stand,
To spread disease throughout the land.

Goblins, ogres, wraiths galore,
Indulge in evil sin and gore,
They poison all that man holds pure,
While breaking all his precious lore.

The witch’s cast their spells by fire,
Hexes made of dark desire,
The lightening bolt will strike the spire,
Returning life to one expired!

The armies of the dead will march,
Chasing man through sacred arch,
The fallen few are torn apart,
While zombies feast on beating hearts!

The carnage through the night will reign,
The sinners in their beds lay slain,
The streets are filled with screams of pain,
The devil turns the young insane!

The monsters haunt thy dreams by night,
To give you nightmares filled with fright,
So stay in bed all tucked up tight,
And prey to keep you out of sight.

Written by Lord_Stabdagger (Lord Stabdagger)
Published 6th May 2020
Like This?
Poems by Author
Comment
#monsters #nightmares
All writing remains the property of the author. Don't use it for any purpose without their permission.
likes 2   reading list entries 1
comments 4   reads 124

Commenting Preference:
The author encourages honest critique.
Re. Gothic.
NBathory (Natalia)
24th May 2020 2:09pm
That there are no comments on this one must be remedied. I loved it, the flow, the rhyming, the monsters, all of it. Great job.

Read poems by Lord_Stabdagger
Re: Re. Gothic.
NBathory (Natalia)
24th May 2020 9:53pm
I have not had a lot of time to read as of late but I will try to dust off some others for you when I can.