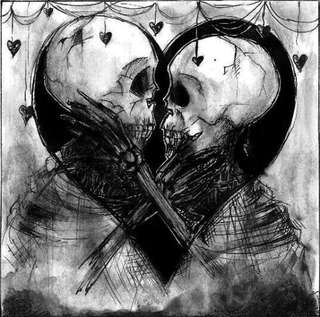 As they both stood on the shore, awaiting their fate
Rebirth is just around the corner
Hoping that death will not be late
As the waves are rushing in, moving closer and closer to their feet planted in the sand on the shore
Oh how beautiful the moonlight is dancing on the ocean surface
Water as black as the night
He reaches over and kisses her forehead then on the lips as they look into each other's eyes
Holding her hand tight, squeezing her as they watch the waves get bigger and bigger
As they prepare for the wave to come and sweep them away
They tell each other: "I Love You"
They knew that there would be sunlight soon and their worries about coulda, woulda, shoulda were non-existent
As they had no regrets in life because they chose love
True love and to be with one another
True love.......something money cannot buy
As the waves come, thoughts of their time together flashed in their head and they grinned...blushing just as bright as the day they first met
As the water comes and carries them into the ocean
Their bodies were drowning
But their spirit lived on...dancing once again on the shore
Still holding hands...together in spirit
They held hands in eternal love

Written by The_Element (Exodus)
Published 26th Apr 2019
Like This?
Poems by Author
Comment
#dark #death #love #passion #spiritual
All writing remains the property of the author. Don't use it for any purpose without their permission.
likes 6   reading list entries 0
comments 3   reads 264
Commenting Preference:
The author is looking for friendly feedback.
Re. Love........Before The Storm
Michael_Goodridge (Private)
27th Apr 2019 2:42am
Hmmm... Beautiful poem.