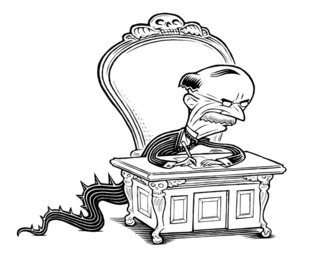 Practicing my I quit speech
over and over in my head....
I cant stand another minute
let alone another week working
for the prince of darkness
ok he might not be the actual
prince but I'm pretty sure
they are cousins
I could list all the
similarities, but that
would take a lifetime
and hes the only one
I know with several of those

my alarm goes off and I lay there
hating life and the fact
that we live in a monetary society
I pull the blanket over my face
to block out the sun
that is one of the side effects
of working for the devils cousin
you start hating everything
and announcing it to the world,
I get out of bed
and shower I have a long day of
lying and fucking people over
ahead of me..
Mr.Darkside said not to be late
today, so I will hurry
before the wrath of hell is awoken
and given orders to wipe out
the secretary

driving in my car as fast as
the law allows
I keep saying "I hate this fucking place"
over and over until I pull up
then I walk in and the shouting of
orders begins...I try to tune him out
but Mr.Darkside has one of those
voices, the kind that pierces
the ear drum and then makes its
way to the center of the brain
and it feels like lightening
hitting my cerebrum
I cringe and do what I'm supposed
to do and the best part
I do it well and better than most

Mr.Darkside likes screwing me over
I think he gets points in hell for it
or at least he should
my favorite time he got me
was the Friday after Christmas
he handed me my pay check I look at it
then I look at him he says "what?"
I'm all "you didn't pay me for Christmas?"
and this is the response I got
"you are Muslim why should
you get paid for Christmas?"
I'll admit I didn't think he would go there
but he did...I was totally shocked
and just left without saying anything
I just shook my head in disbelief
hopped into my car and hit the nearest bar
that is another effect of working for Mr.Darkside
I tend to hit up the bar a lot more

my boss likes to fuck with poor people
I hate that the most
he will have crackheads from the neighborhood
clean our lots and then only gives them
random change from his pocket,
no quarters only nickels
and dimes but mostly pennies
and then the best part he makes me go pay them
so they think I'm the asshole not him
and then karma is whispering "look bitch
you know better" and I'm like "what the fuck
do you want from me I have bills"
I just put my head down on the desk
and bang it a few times and scream on the inside
then its back to paperwork.....

he is rubbing off on me... I did the unthinkable
it was snowing and kinda raining
I don't know what came over me
my hand reached down and packed an ice ball
and I well my hand tossed it at my co-workers face
it hit dead center and it hit hard
needless to say Jay went home with a bloody nose
and a red face... I got a pat on the back from Mr.Darkside
he even bought me lunch that day....
I felt bad and I still do..well...kinda
so who is worse Mr.Darkside for being his evil self
or the chick who knows better but does it anyways
all in the name of having bills....

Written by nikkimoe
Published 8th Feb 2013
Like This?
Poems by Author
Comment
All writing remains the property of the author. Don't use it for any purpose without their permission.
likes 11   reading list entries 0
comments 15   reads 713
Commenting Preference:
The author encourages honest critique.
Re: Mr.Darkside Is My Boss
johnrot
8th Feb 2013 7:51pm
i think my boss is your boss's overpaid brother.....shit here he comes.......

re: Re: Mr.Darkside Is My Boss
nikkimoe
8th Feb 2013 7:53pm
lmao!!! hahahahah yeah probably...mine is also lurking about somewhere behind me :)

Read poems by nikkimoe
Re: Mr.Darkside Is My Boss
blocat
8th Feb 2013 8:35pm
Wow Nikki well expressed mate. you brought back some memories too. I used to be self employed and met a few mean tight-arsed bastards like that. Once, in my younger wilder days, I collected my commission with a tye iron. He always paid promptly after that. ;-)
keep writing poet I love your stuff.

Read poems by nikkimoe
Re: Mr.Darkside Is My Boss
Firebyrd
8th Feb 2013 9:52pm
Here Here Nikkie!
I love this one!

Read poems by nikkimoe
Re: Mr.Darkside Is My Boss
rain1courtel (RainC)
11th Feb 2013 4:30am
You are truly brilliant with delivering a story, Nikki! You know you're one of my favorite writers and this read proves why you're on my list!

This ink was so descriptive, that it momentarily made me hate your boss too! lollol. Just incredible how you pulled me in with the very first line and held my attention till the very end. I was almost wishing for a sequel. lmbo!

Read poems by nikkimoe
Re: Mr.Darkside Is My Boss
LokiOfLiterati
11th Feb 2013 11:07pm
and this is the response I got
"you are Muslim why should
you get paid for Christmas?"

Muslim? Peel that fucker like an onion.
What gets paid and when has nothing to do with opinion
Religion. Cultural decision.
It isn't all of the ways he can resolve his play
It isn't a holiday to absolve
It's just a call of the fucking law

But then with or without my clout and jaw
I work behind the scenes, so I doubt much of what I saw
Would urgently count for currency past insurance against an insurgency but tracking back tales for blackmail isn't the play for a one who slays with exposes.

Yeah on a lark undisguised those dark side fuckers let sparks fly while you toil.
Like they're testing to see if you're loyal.
A jest from someone with an ego of royal unequal oily weasel, boiling weevil creepshow bleeding souls tight, crass and unconsoled like needling Christ's asshole. Asking "Why can't you give me MORE yo!"

It's a need to control and feed what's broken in their chest-hole. That's what makes those festering chodes feel blessed when they observe as hors d'oeuvres souls and only purr when they get SERVED!

They like the pain of giving you a stain. Wish I wasn't so familiar with this scrote's frames. But on every note it's not a riddled game.... I've seen the same.

Sucks when you make your paper on major blinding means behind the scenes.

Mr. Darkside can stand being illegal, but you still have a seperation between...

your self unequaled. The span you've reached to hold. And your hand of evil?

Stay true to you, Nikki. I love your work!

re: Re: Mr.Darkside Is My Boss
nikkimoe
12th Feb 2013 2:33pm
Loki! this is the best comment ever!!!! thanks so much for getting the magnitude of my horrible job :)
yeah I wonder if he pays for Ramadan? all thirty days? and then there is Eid...lol yeah I tell that story everywhere I go and people ask me, how can I still work there and i use I have bills.... :(
sucks but its the truth...lol thanks again Loki for reading and commenting!!

WTheeeeeee Fuuuunnnkkkkk is wrong with your boss ?!!!!?
He def', needs something shuvvvved where his Christ don't shine ... !!!!!

The poem is very powerful, but, as i'm learning from your work,  your, seemingly, warped existence does indeed hold powers of the dark, and, i'll say, slightly ... Less Dark ... moments of irony and humour, but, if you still work there ..... There is no amount of humour that could make me smile there ... !!!!!