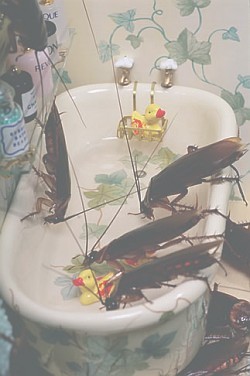 < the roach and the tampon, long version >


ever since i wrote this poem:

people, of course, have asked to hear the story:

< the roach and the tampon, long version >

ok...
picture two young hippies
(or the best approximation we could come up with having grown up
in small texas towns where our only information about hippies
came from time magazine)

me, with long flowing hair
and her, in a dress she'd made from an indian bedspread

we were living in a house that should have been condemned,
with five other odd souls in the early 70's

the house was located in the, then, run-down (now yuppie haven) area of the heights
in the (ever repressive) city of houston, texas located on the gulf coast of fungus

"the heights" - we loved that name, since, in our texas-hippie minds,
it reminded us of "haight-ashbury", our mecca  (yeah, we miss-pronounced it)

we rented the house from a benevolent slum lord for $50 a month
with the promise to make repairs to it
(this ended up consisting of cutting a large hole in the roof so we could sit outside
(the roof wasn't sloped much) and watch the stars and city, usually under the effects of some drug;
and digging another large hole (6 by 15 feet) in the driveway for our organic garden which
we never got around to)

i raced upstairs
and found her standing in front of the commode
blood, streaming down her legs
fingers, way up in her vagina
frantic
trying to get something out
"it's inside me!" she yelled

(maybe this was one of those acid flashbacks (i thought)
like the anti-drug people kept warning us about and
that we kept hoping for (in vain),
or... maybe some acid-induced greek play)

i tried
(one of the few times i'd ever had my fingers inside a vagina
with no sexual intent whatsoever (except for another girlfriend
of mine who kept thinking she had warts there and i had to feel
for them, then assure her there weren't any
(she didn't handle drugs very well))

then it came to me:

i ran to the kitchen and grabbed it...

water and blood,
all over the bathroom floor,
but finally,
i flushed it out

a roach! (and still alive!)
it hit the floor, scrambling, trying to escape
and my girlfriend (true to her vegetarian beliefs)
scooped it up in her hand and released it outside

a while after this
we parted
me, to the army
and her, to join a commune in bolivia
(at the time, bolivia had no extradition treaty with the u.s.)

seven years later
we met again
the result of a series of incidents involving:

a lesbian transsexual
(who had invented one of the first electronically steerable radio antennas),

a large quantity of brown crystal mescaline
(she only dealt the "holy" drugs: mescaline, acid, and psilocybin, never the "death culture" ones
(and this, only to pay for college (she said))),

the hood ornament from ken kesey's bus, "furthur" (not "further" as it is sometimes misspelled),

we could never figure out
how the roach got in there (tampon?)
but as she said:
"it all makes sense now,
after all,
it was a 'cock' roach"

Written by rayheinrich (Death Plane for Teddy)
Published 15th Aug 2010 | Edited 12th Jun 2012
Like This?
Poems by Author
Comment
All writing remains the property of the author. Don't use it for any purpose without their permission.
likes 5   reading list entries 4
comments 21   reads 1213

Commenting Preference:
The author encourages honest critique.
extraneous notes #1&2 to < the roach and the tampon >
rayheinrich (Death Plane for Teddy)
- Edited 3rd Feb 2011 10:31pm
15th Aug 2010 3:01am
extraneous note:
i put the tampon in the trash when i cleaned up the bathroom.
the next day the dog got into the trash and ate it.
(the vet said this was very dangerous as sometimes
they cause an intestinal blockage which requires
an operation. luckily, our dog was a good chewer.)

Read poems by rayheinrich
that
Anonymous
15th Aug 2010 11:08am
is quite the fucked up story.

i enjoyed it immensely.

....
orGinality (Gi)
28th Oct 2010 10:57pm
omg, that is horrible, but funny as can be, the detail paints the scene so vividly, i would have flipped my wig...i like how this is wrote, it shows us (your thoughts) verses just depicting what was going on....the ending was amazing, makes me think, yeap, that must have been it...lol

So sick, I love it.
pyrategurrll (Lauren Tivey)
12th Feb 2011 3:22pm
Slick, sick, and brilliant.  I like story poems for a change, now and again, and those as well done as this are the reason why.  The build-up is so good here (you KNOW what's coming, yet can't turn away), but what does it for me are all the little asides & details, which make for a much more interesting read~I don't think it would've worked for me as just a straight cockroach/tampon poem.  Nice work, Ray.

Recovered
Anonymous
24th Jul 2011 6:24am
So now that I'm baaaaaack, I think you could effectively end this thus:

"  (at the time, bolivia had no extradition treaty with the u.s.)

we could never figure out
how the roach got in there (tampon?)
but as she said:
"it all makes sense now,
after all,
it was a 'cock' roach"     "

re: Recovered
rayheinrich (Death Plane for Teddy)
24th Jul 2011 6:13pm
yes, definitely better. but it would not be living up to the name "long version".
to be truthful, or, (truthfully) more truthful: it's a medium version
derived by severely editing the actual long version. i took out
new york city and oakland and chichaoua (near marrakech)
and all the stuff about NASA and moon rocks, assorted lists
of pet burial sites, etc., etc., about 83 pages in all;
so count yourself lucky.

re: re: re: Recovered
lynan39
13th Jun 2012 00:47am
Yes indeed, I agree with Anonymous; this is a fucked up story but oh so entertaining.  Of course, I was on the edge of my seat waiting to see if you were sucking with the turkey baster or hydrating with the turkey baster.  As I was trying to figure out if this actually would work...well I am embarassed to say, the VaG does stretch, so perhaps a good amount of liquid could go in and eventually come out taking other things with it.  I can't believe I just wrote that.

Re: < the roach and the tampon, long version >
mjolnir (Dgim K. Bo)
3rd Aug 2012 10:21am
I read this the other day, life can be fun and freaky but Gsus, this is some twilight zone freaky-funny.
Just read it out loud to my mom, lol, she loved it with a gasp and a chuckle.