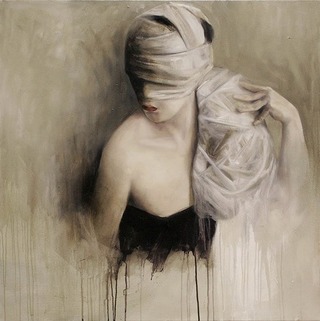 (Written for the Poetry and Art Collides comp)

Her voice weak from silent screams, she lips ached for protection
from the demons that kissed words out of her traitorous throat
out into the world she feared

Inhaling in short, sharp, agonised breaths she sought the gauze
to wrap tightly around her exposed nose and untrustworthy mouth
suffocation the risk she was willing to pay, if would keep the demons at bay

Written by Indie (Miss Indie)
Published 28th Jul 2012
Like This?
Poems by Author
Comment
All writing remains the property of the author. Don't use it for any purpose without their permission.
likes 3   reading list entries 1
comments 7   reads 578

Commenting Preference:
The author encourages honest critique.
Re: Fear and Faith
marielavoue (Gypsy Red)
28th Jul 2012 1:13pm
I do not realy know what to say about this piece Miss Indy, I have read it at least four times, the vibe I get is very disturbing like being in a strait jacket in room with pillows in the wall. A severe mental breakdown.It was an interesting piece, and most certainly crafted to the image.

re: Re: Fear and Faith
Indie (Miss Indie)
28th Jul 2012 1:26pm
Thank you for your feedback Gypsy Red. I was aiming for tone of severe mental breakdown, a snippet of what it's like to be in the head of someone losing their mind. I'm honoured that you've taken the time to comment.

Read poems by Indie
re: re: Re: Fear and Faith
marielavoue (Gypsy Red)
28th Jul 2012 1:37pm
The honor and pleasure was mine you madam are an excellent writer I should hope to be of your caliber one day.Good luck with the comp.

re: Re: Fear and Faith
Indie (Miss Indie)
28th Jul 2012 10:30pm
smart ass :p i was going to call this one blind faith but it felt wrong, and after agonising over a better title, fear and faith seemed apt like well made gloves. Glad you enjoyed this one Christian, and thanks for your comment :)

re: Re: Fear and Faith
Indie (Miss Indie)
28th Jul 2012 10:33pm
thank you very much Scattered Thoughts, for your lovely feedback. I'm honoured by your comments. Glad you enjoyed this chilling little piece.