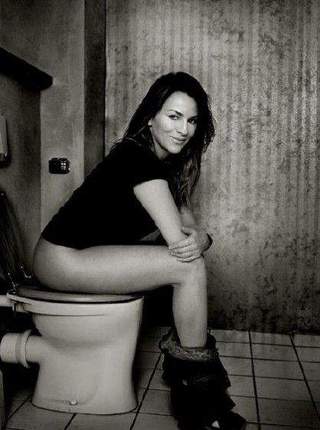 "Oh she may be weary
Them young girls they do get wearied
Wearing that same old shabby dress
But when she gets weary
Try a little tenderness......."

New job, new town
Sylvia was amongst the first of the new faces that I found.
Now I'm not really a shallow type of fellow
No, most of the time I'm laid back, cool and mellow.
She definitely wasn't the prettiest lady in this little southern town......

......but hey, I'm a pro and I like to flirt.
She's single and likes to mingle so what will it hurt?
The distance from my job to my place was 35 miles away.
She picked up on that morsel and said to me one day......

"You know, I kinda' dig you Music
You work hard, for real.
Sweetie let me invite you over to my place
for a good, home-cooked meal.

We'll have some stuffed pork chop
Saute some Zucchini, some fresh bread-that'll work
and then the piece-de-resistance'
A very special dessert......"

Well, about 5 o'clock, I'm walking through her door.
The place smelled really, really good.
She's layed a spread out on the floor.
Everything was laid out
just like she said it would be.
The meal so far is delicious
and after a couple glasses of wine, she started to
"look" pretty damned good to me.

She wore this little Coca Cola Shirt.
Across her breast were the words "It's The Real Thing".
And she had some big , old pretty legs
spilling from some small, tight shorts
held up by a little, bitty old drawstring.

"Let me go on back here and get your desert ready."
I watched her round derriere bounce to and fro.
In minutes, she called "come and get it".
I followed her voice to a dimly-lit room with an open door....

The room was illuminated with hundreds of candles and incense
Sylvia lay naked on the bed
Her oiled skin shimmered in the faint light
and without another word said......

I could tell it had been a long time
She got me out of my clothes so damned fast
It completely blew my mind.........

She was determined to take me "around the world in a day"
Swung her hips around to a "69"-my lips mark the spot.
With a little bump and grind, we wasted precious little time
getting each other very, very hot.

My dick was harder than calculus
and her pussy was so deliciously wet.
Before I knew it, my hands were wrapped around her ankles
and her legs opened as wide as they could get.

I relaxed my grip on her legs for just a minute
and my big lips and talented tongue began their assault.

A slow, delicious massage on her puffy lips, wet slit and swollen clit.
Grinding her hips furiously into the mattress.
Insaitiable.....deep moans and groans!
Her beautiful long nails dug deep into my flesh
I thought babygirl was loosing it.

You know the man in me was feeling like the damn king!

Right then and there,
this sound began to eminate.
Vague rumblings from deep within .....her belly.
I wondered was it something that we ate....

(.....that thought only lasted but a moment)

I just kept on eating that "good and plenty"
I aim to please and babygirl gonna' bust this nut.
Wave after wave of sensual vaginal contractions
I slowly pressed my finger deep into her butt!!

A strange sensation of pressure
began to build up inside
Again I heard those distant rumblings....
as my finger started it's retrograde backwards slide.

Fingers punishing that tight puckered hole,
I felt it start to happen.
Her body tensed sharply as she's
all over the bed just a thrashin' !

gripping my head tightly between her smelly, brown, shitty thighs!
Came so hard till she fell off the bed
Creamy brown scat all over my face
Filling up my nostrils, covering up my eyes.....(damn, damn, damn!)

If ever you hear that distant chocolate thunder rumbling
and you find yourself "rolling in the deep"
Brother's and sisters, please heed the warning.......
When she screams......."Ooooooooooh Sheeeeeettttt!!"

Written by MusicallyMrM (Mr_Mahogany_Wood)
Published 14th Jun 2012 | Edited 15th Jun 2012
Like This?
Poems by Author
Comment
All writing remains the property of the author. Don't use it for any purpose without their permission.
likes 9   reading list entries 1
comments 15   reads 2100

Read poems by MusicallyMrM
re: Re: Oooooooooh Sheeeeeeeet !!!!!!!!!!
rain1courtel (RainC)
14th Jun 2012 8:01pm
Oh lawd! WOW!lol.. The worst days of our lives are usually unforgettable ones! Good read though!

-
UnleashedHeathen
17th Jun 2012 11:57am
Well fuck. I did not expect that ending.
I probably would have died inside.
Still a great poem.

Re: Oooooooooh Sheeeeeeeet !!!!!!!!!!
waggy (Disillusion_Ment)
18th Jun 2012 6:23pm
Brilliant!! Truly brilliant sir and, as we say in the UK, I doff my cap to you. Absolutely loved the flow and pace and that ending, fantastic!!

Read poems by MusicallyMrM
Re: Oooooooooh Sheeeeeeeet !!!!!!!!!!
delumi
17th Feb 2013 3:01pm
LMDAOOO!!! This story is hilarious MrM. I'm sorry this happend to you, unless you actually enjoyed having s*** all over your nostrils! Jajajajajaja... Great story! Thanks:-)