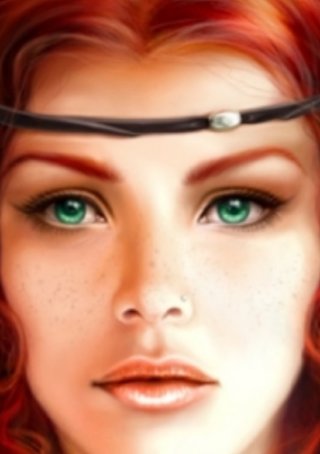 In love with Green Eyes containing a hint of blue

Losing myself in dreams of green with just a subtle hint of blue
My soul-self searching through the ethereal in the hope of reaching you
In the space where the magpies fly, within the vestiges of life’s residue
Flowing on the whispering breeze to the land of 'Dreams Come True'.

Crushed from a life that kicked me down then stamped on every desire
My one escape was writing, creating infinite realms to inspire
The favourite kingdom to escape from the degradation of shames attire,
my own world of 'Dreams Come True' where kindness and love retire

I developed whole histories, writing of the Chaos before time began,
of four families; Feelings, Emotions, Love, Lust and 'God the Bogeyman'.
I provided them all with qualities I'd been denied, at least that was the plan
But God kept gaining minions, Hatred, Rage and Fury quickly formed a clan.

As each life-event was played out in reality, another was pinned down on page
Every burn, blow bruise and break, every soul-destroying insult spat with rage
Was turned into a fantasy dream, where God and his flunkies would engage
to confront the Families, who would always win, on my minds theatrical stage.

In 'Dreams Come True' good defeated God, the characters of my torment
not a singular individualistic entity, but all who made me resent
I was allowed to hope and dream, imagine what happiness actually meant
I wrote it all down beautifully, in my fantastic land even God had to repent

The only love I've ever actually know was for a 'sister' and my soul-twin
I met my 'twin' at seven years old, he was also used up and dead within
My 'sister' I didn't know until I was fourteen, my first time with female kin
Why do I never mention a mother? To do so within my hearing is a moral sin

The two who I've mentioned are the only one's who have ever know truth
and one of them is now dead, overdosing on the guilt and shame of his youth
I watched him destroy the parts of life which had been taken, the drugs helped to sooth
I got the call one day from my 'sister, ' who'd found out first, her voice still uncouth

That just leaves my real true loves, my three beautiful darling kids
They never expect anything of me, whether I'm up or within life’s pits
The love they show for me is honest, genuine and never requiring remits
I spend as much of time with them, well, as much as the ex wife permits

I am still a scribe for 'Dreams Come True' with positive writes of optimism
But I also have 'The NeverForever Land' now where I pour out the cynicism
One is the dark to the others light, when they’re viewed through a prism
And it is this twin ending, the differences of outcome, causing indecision

The dreams I have in Green with blue, are inspired by a gorgeously intelligent muse
People tell me to just commit to the act and that there's nothing really to lose
I've had my entire life broken so many times, there's only two who knew the abuse
And, when the full extent is fully disclosed, would my new hope then refuse?

I feel such shame, disgust and loathing whenever I catch my reflection
I stare at the burns and the remaining scars, revolted by the imperfection
People may be enthralled by my words and my voice can induce affection
But when my mind or body are exposed there's only one outcome – disconnection

So, my Lady, with the liquid green eyes, that contain a hint of blue,
Do you think I should write our script, based in the land of 'Dreams Come True?'
Or maybe it's wiser that I desist from that road, not bother with the endeavour
and just start pinning the words, as most are these days, in the land of 'Never Forever'

Penned to a say “yes” to a question that has been asked
by my ethereal lover, an unseen but inspiring muse
I will say nothing more, my love will remained masked
if your “yes” was intended for someone else’s news

Written by waggy (Disillusion_Ment)
Published 30th May 2012
Like This?
Poems by Author
Comment
All writing remains the property of the author. Don't use it for any purpose without their permission.
likes 3   reading list entries 1
comments 2   reads 1601

Commenting Preference:
The author encourages honest critique.
Re: In love with Green Eyes containing a hint of blue
firecrackerxx
30th May 2012 9:22pm
Oh my! This is stunning, breathtaking and just exquisite..this is the kind of write that would melt a woman's heart to butter..what a glorious muse you must have waggy..This was pure heavenly enchantment! Fcxx

In love with Green Eyes containing a hint of blue
Magdalena
30th May 2012 9:29pm
I agree with fc, so much emotion throughout. You show so much strength to have come this far D.  I hope you find your dreams and live them one day.