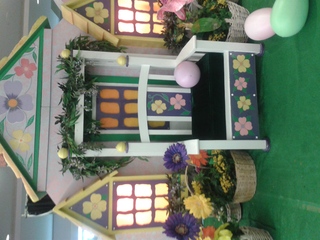 E.velyn got up early two weeks ago, ready to take on the world. She and Eddie humped it up til dawn the night before, trying out 69 positions no one ever imagined, which came from the book of the Karma Sutra. An encore ensued with Eddie eating her pussy out. Evening out bets for his bowling mates called Easy Eddy's, was what this night of enlightenment was about.

A.s far as the rest of the day went, you'll have to ask her, because not only was it her first day on the job, her ass was so sore that it was hard for her to put her costume on. Little did she know that her fuck buddy with the alabaster eyes was a con. It was her time and turn to be this year's Easter bunny at the All American Ape, where all kids went ape all day. Also, it was the city's most popular place for them to play.

S.hit! Something sure started to go sour surpassing 6:00 P.M. All of a sudden, she started pissing on herself uncontrollably. So, she hurried. Slowly, she began looking from side to side, scanning for witnesses as she rushed to the bathroom. Scared shitless, she felt doom. As she wiped herself, the substance from her puss was green, she began to burn, itch, and hurt. Next, the bathroom door made a loud boom. It was her co-worker named Burt. She then rolled her eyes and slumped her shoulders, saying,"Oh, me. Son-of-a-bitch! Slutty Eddie gave me an STD!"
"Hurry!, I've got to piss!," yelled Burt. Then, he started a countdown. "One, two, three!" She started stinking from hell to high water. Since 6:00 P.M., she dribbled starting from the bathroom all the way to her boss Sam's office. From that time on, her day sucked. It seems that when it came to men, she never got kissed but always seemed to get fucked. She just started the job and now it may be over six weeks before she could save up enough money to start treatment. By lunch time, her bisexual co-worker Stephen stopped sharing salads with her from her own plate. It was now getting late. He knew something had surely happened and decided to make sure not to even share a slurpee with Evelyn. She rushed to her boss Sam's office, hoping to salvage the situation she was in. Too late! She began to shit on herself uncontrollably as she tried to go home. Scrunching up her face, she tried to slyly scoot away. At the same time, she whispered to herself,"Not again. Once I get home, I think I need a shot of gin." Sam was taking in this scene gleefully, while at the same time wanting some type of revenge for her denial last month, turning him down on an all night fuck fest marathon, at his cousin Sue's penthouse suite. So, he smiled really big,and asked her if she remembered to wear socks. Then he told her to put back on the Easter bunny costume, and to "shit rocks."

T.aking in every word that Sam said, she then began to think that he was teasing. Next, she asked if they could re-talk this over. He then told her to "get to steppin", because last night he was supposed to "tap that ass", not Eddie. He didn't want to gloat alone. So, he yelled for his best friend Freddie. Tears began to well up in his eyes just thinking about it. He then moved a little closer to Evelyn, asking, "Do I smell shit?" So, to top it all off and take away his anger and pain, in front of a crowd of 80, he tore off her bunny pants, and walked down the hallway, tossing a roll of toilet paper at her. Furthermore, he yelled, "What are you, a tin can?!! Take it like a man!

E.velyn mustered up what dignity she had and put the bunny suit back on, afraid of quitting because she was out of work for two whole years before she received this job. Oh, how she wanted to sob! She felt like she could tear Eddie's ass up right now, seething about what was happening to her. After this,it seemed like time slowly ticked by. Sam was going to pay for this, so she rubbed her shitty self up against him, on the sly. Neither one of the parents, nor a single child was sympathetic. Even Freddie,who was athletic. They all decided that someone threw "stinky chocolate" on their "bunny". And, that there was no way in hell they were going to have their Easter ruined by not taking pictures with the Easter bunny. As a result, parents rushed to their vehicles to get towels. No one was going to ruin their day. Not even a bunny who couldn't control their bowels. Their children and some of them made sure to be careful, and to sit on the bunny's lap without staining themselves. In between taking turns, people got leary, because the mall closed at twelve. Evelyn swore this was the worst day of her life. She mentally took notes, knowing that this is what a woman faces when she has a cheating partner for a man, especially if she were his wife. From that moment on, all she could think of was how she could get even with Eddie. This ruined her from ever wanting to go steady.

R.eeling from the shock of it all, different parents' comments really rubbed it in. Especially one in particular, who claimed," This is one day I'll never forget. No time to fret. In fact, it's kind of funny! Now that my business is taken care of, I kind of feel sorry for that girl. But damn!, that sure is one pissy bunny!" The crowd laughed. Even the mall's owner, Mr. Meester. He then walked up to her and paid her $1,000.00 for her troubles, while wishing her a happy Easter. Meanwhile, once she made it home, she spent an hour on the pot. And still, she began to hope that some day Eddy's dick would fall off and rot. Reality set in, now that she reeked of the most retched stench. She then began shouting expletives, including the word wench. To think, it all stemmed from rocking the shit out of Eddie, doing it up on her grandma's old cot. This situation was not funny. Evelyn Alicia Sharon Tribble Everly Roberts, was one pissy bunny.

Written by King-Galaxius (King-Galaxius Stravinsky)
Published 21st Apr 2012
Like This?
Poems by Author
Comment
All writing remains the property of the author. Don't use it for any purpose without their permission.
likes 1   reading list entries 0
comments 2   reads 1267
Commenting Preference:
The author encourages honest critique.
S. DOT
Seven_The_Truth
28th Apr 2012 3:48am
Ok so One Pissy Bunny is a trip. that was an Easter surprise for her.

It wasn't a poem in the sense that I think of poems i looked at it more as a short story but i dug it.

I see your mind is far out and imaginative while sexually and nastily creative if that's even a word. I may have made it up lol.

Entertaining story though I must say