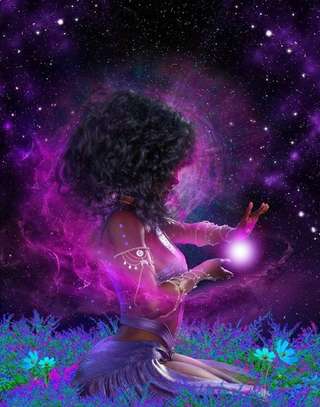 Souls Galloping In The Wind

I did not chisel the commandments in stones
My truth have always stood for me alone
Centering myself, inhaling, when the soul requires cleansing, allowing Mother Nature to hear my incantations as I universal atone
To the question, asked of me at best
No, this hemisphere has not made me melt
Only the realization of intellectual overload when my existence needs to give credence to the four elements when at rest
Such a beautiful moon that sits on the throne of infinity beaming from the skies
Look up and listen for the sultry benedictions of its midnight tales and divine lullabies

That superior light can travel your cerebrum to the third Heavens, given of its ancient stories to tell
Open your cognizance awareness, hold my hand as we step down in Hell
There is nothing to amuse but dark and the feel of its silhouetted heat
Cries of forgotten humanity being slaughtered like raw meat
Since the beginning of times
Seconds and minutes of the clock have turned by the Creator’s chimes

Most would say is there an afterlife, relief from this earthy strife
A challenging affair to answer with several variables to sift through are involved
What a funny riddle the intellect always tries to solve
That third eye ordained within the cocoon of the womb
A far intellect to have journeyed past Jesus’ tomb, the Blue Nile, and Egypt sands dunes
To know if hearts arrive within the calling of infinity, ashes to ashes dust to dust the miracle of us then gone too soon

The beauty of the brain when maneuvering through the portals of ancient rites
There is no times of elevation only the cascading of a spiritual light
Have I died and moved on
The mind, body, and vessel of the soul has touched many dimension and heard the creed of all the universal songs
The Illuminati and the facades of damnation in the mystic, their hidden numerology agenda right under or nose it silently drifts
The hand that rocks the cradles and the gigabytes, their collective summonses are wired and deeply embedded in it
Misplaced mentalities with dual personalities assuage for greater denominations in the pulpit
Two headed serpents that hunt flesh, molest the minds of children, and then denounce women as being taboo and unfit
Celibacy of softness to devoid their company, by a religion oath of one of divinity’s most cherished gifts

Inhaling, bringing the body back into the shell from where the soul is placed
The flow of blood coursing through of our veins, vital organs of survival are miraculously encased
I never understood dark minds and why we learn to hate
Death of the spirit is found in a heart who refuses to psychologically communicate, who only berets
After the Book Of Revelations’ there is a race to be won
Unto the eyes that sees the truth and detail the struggles, our worth here on earth, thy Kingdom shall come

The sacred scrolls are told in the Book of Enoch’s plight, hidden and ostracized from plain sight
And you look upon a cross with a pale man on it who is called various theology names
The falsehood of its alphabetic lettering, Timothy, John, Luke, its preaching’s scriptures that were not indoctrinated by the timeline, which we give homage, sing hymns in His resurrected fame
I worship the Creator, the Father and the Son are not the same
As we leaf through a given bias book of disunity, inscribed with generations of incest, lust, murder, debauchery, and shame

Heaven and Hell is in your mind and how your perceive
Crimes of the heart, crimes of the skin, crimes unto humility is always well received
Your faith is tested daily, and cooled by pages of the Good Book’s ideology of the original sin
From the beginning of creation, festered with demons, giants, and Jinn's
Forty weeks to give birth
Ten centimeters from the silvering of man’s endowed girth
The Ankh, a relic of ancient ancestry a replica of the womb, the fallopian tubes, an amulet certainly to adorn of its symbolic worth
From darkness, the soul entering through the divine passion as the red sea parts in the renewal of birth
Lay hands upon the belly and pray to ward off the beast’s curse

The head crowns unto another lifespan sliding out the portal of blessed fluid to breathe, to soar, to fly
Pushed down and out as the worlds now hears the fear of its first cries
Unto the slavery of alarms clocks, working by the sweat of one’s brow, from sunrise
Sundown is the relaxation of the mind, heart, and body when sleep overtakes
Awakened only to repeat the same fate

Know this is temporary, as energies recharges and sparks the shell of humanity somewhere else
Nomadic memories fades of self
Deja vu is the only comfort from a begotten time we once lived, have felt
Yes, you have seen the mere flashes before
In the greatness of your presence, your insights has moved on as the placenta has been birthed from a previous life the subconscious concealed, once you tapped into the celestial core
You will know how many lives your soul has stored
New blood, timeworn ambiance unto another reality will be poured
Fear no more, a thousand deaths the soul has resided fourscore
Oh, it’s time for my mind to regroup in this dominion
Looking over the peaks of those mountaintops does tend to drain the psyche cortex if I never mentioned

Written by SweetKittyCat5
Published 25th Jan 2023
Like This?
Poems by Author
Author's Note
I found this on my memory stick...untitled... enjoy

SKC
Comment
#humankind #meditation #philosophical #spiritual #TruthOfLife
All writing remains the property of the author. Don't use it for any purpose without their permission.
likes 5   reading list entries 2
comments 5   reads 232

Commenting Preference:
The author is looking for friendly feedback.
Re. Souls Galloping In The Wind
Phantom2426 (Francisco J Vera)
25th Jan 2023 2:30am
We need to protect mother nature by keeping our planet clean.  Keep on writing  my Queen.

Re. Souls Galloping In The Wind
Styxian
25th Jan 2023 3:40am
Great message carried throughout this awesome write.   When you get in the zone, nothing stops you!   Bravo.

Re. Souls Galloping In The Wind
Solomon_Song
25th Jan 2023 6:14am
Enjoyed this mystical wander. Favourite lines (for its portrayal of human regeneration):

Re. Souls Galloping In The Wind
nutbuster (D C)
25th Jan 2023 9:45am
my friend read this beautiful spill on man's Growth