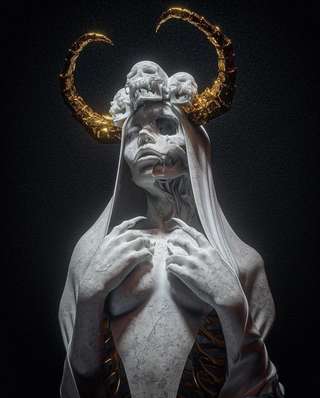 "Unwanted violation of the flesh is always a disgrace
Just like hateful spit or stank piss in the face,
"But control of the mind through sexual magic
Create unforgiving sins that may become suicidal tragic,

"Saturating the air with a necrophiliac sexual vertigo
That would bring embarrassing pleasures of the undead sex show,
"Many sick pleasures has already occurred to her victims
Now begin their horror as the dead begin to lick them,

"Tongues traveled deep into asses, causing many to squirt or nut
While a tongue became dislodged and wiggling deep in a girl's cunt,
"Orgasmic fear overwhelmed her as she screamed and cussed
But turned uncomfortable when the tongue got stuck in her uterus,

"Sexual organs were ripped away and added to an undead frame
Replacing decomposing flesh to play their undead hermaphrodite games,
"Gender, sex or religious preference to Inikie it did not matter
Because all was going to climb the necrophilia ladder,

Commenting Preference:
The author encourages honest critique.
Re. A Dead Fuck
I_IS_ME
21st Nov 2022 5:57pm
This is to freaking tight dude the darkness and the eroticism is just crazy as heck. You have truly outdone yourself on this one. You should had comped this one. Again to tight

Re: Re. A Dead Fuck
CasketSharpe
- Edited 21st Nov 2022 6:53pm
21st Nov 2022 6:51pm
This poem is a follow up of my Halloween poem (Undressed Emotion). Just went there with my dark nasty horror of a Dungeons and Dragons character. Thanks as always for reading and commenting.

Re: Re. A Dead Fuck
CasketSharpe
21st Nov 2022 9:46pm
That would sound like a good plan. A little bit of extra death and horror sprinkled with the exotic.