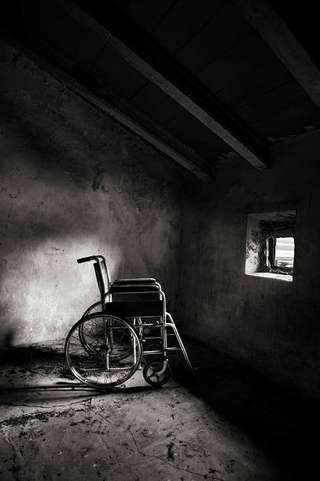 Someone had left a large, black wheelchair next to the metal trash bin outside her apartment.

It looked to be in good condition. She dusted it off and slowly wheeled it through the front door of her place. It seemed sad for such a thing to be thrown away. She wondered if the person whom it had belonged to had maybe passed away.

She tried not to think about it.

Maybe she could have use for it. It would be a useful thing to transport trash bags with. She hated going to the trash bin, and there were already numerous bags of trash accumulating in her kitchen.

It was difficult for her to walk now. She’d gained so much weight. She was forced to use a walker, and it was humiliating and degrading.

She sat down at her small table in the living room. This table was actually a wooden electric wire spool covered with a meager table cloth, upon which she housed what comprised her life: her medication bag, makeup, jewelry, perfume. Two television remotes. Face cream and baby wipes. And a few, errant, empty plastic water bottles. Books rested at the bottom of the table, books she hadn’t read in so long. A tablet of white art paper sat unused, along with pencils and small paints and brushes.

She’d tried to draw and paint again. But nothing came.

She looked to the black wheelchair sitting in the center of her living room. It seemed dark and strange and incongruous against her small, meager apartment walls with their various light paintings of flowers… Her place she had tried her best to decorate and shape into some semblance of a home.

She sat and drew a shaky breath. It was proving to be a long day. The hours stretched out with nothing to do. Nothing shimmered with hope.

She didn’t work. She’d been on disability since she was in her twenties for bipolar depression, and though she’d tried her hand at different jobs throughout the years, she could never seem to keep a job for longer than a year. Her longest employment had involved working at a funeral home. She’d fiercely loved it, and she’d felt like she was helping people. She’d felt needed, and necessary.

But it hadn’t lasted. And for some reason, none of that seemed to matter now.

She continued to sit.

Dusk began to fall outside her window.

She reached for one of the television remotes, but something stilled her hand. She was in no mood to watch TV.

She picked up a book from the bottom of the table. But when she opened the first page, the words began to swim in a blurred haze before her eyes. She closed it softly.

She missed her 24 year-old daughter. But she knew her daughter was busy with her own life. A boyfriend, online college, work…

She had no friends. No lover.

It was gradual, what she liked to call the “fading.”

Simply, a darkness slowly crept over and inside her like a murky blanket; nothing shimmered with pleasure, or promise. Her mind fumbled and tried desperately to catch at small activities, small hopes that would bring her distraction from the growing sense of pain and emptiness that was welling inside her, which only seemed to grow more intense as the night grew quieter and the shadows lengthened.

Her eyes traveled to the window. The black wheelchair was reflected there.

Her breath caught softly in her chest.

She thought, for one fleeting glimpse, that there was a person sitting in the wheelchair. A shadowy form seemed to be hunched in the seat, forlorn, lifeless, as if there was no hope, no purpose. No meaning anymore to be found within existence.

But it was just a play of shadows.

But the night grew even darker. And so did her soul. She felt herself slipping away. And desperately she tried to grab on to invisible tethers inside her heart and mind, like ropes, that might save her from the emptiness and the shadows.

As tears slipped down her face, she raised herself slowly and painfully, and walked silently to the wheelchair.

When the police opened the apartment some days later, they found a motionless, lonely form slouched in the wheelchair.

Written by toniscales (Lost Girl)
Published 8th Nov 2022
Like This?
Poems by Author
Comment
#bipolar #dark #depression #despair #loneliness
All writing remains the property of the author. Don't use it for any purpose without their permission.
likes 1   reading list entries 0
comments 1   reads 125
Commenting Preference:
The author is looking for friendly feedback.
Re. The Chair
brokentitanium (k.)
9th Nov 2022 6:07pm
Oh, such a gripping story... it just got darker & gloomier, like the subject's mind... hopelessness, well expressed.
Good to see you here
😊k