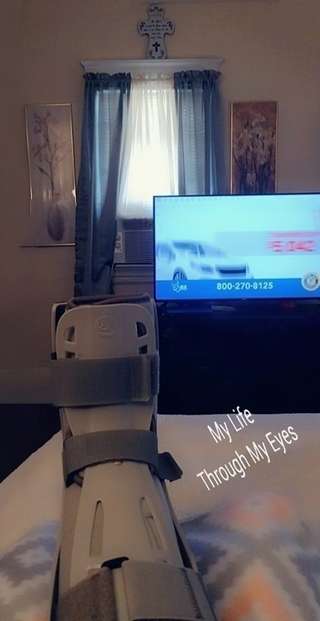 My Life Through My Eyes... (Proverbs)

I am stiff, sore, my ankle is a tad swollen, but not as painful as it was hours ago.

I surprised myself on 11-06-22 with sheer determination after fracturing my right ankle that resulted in a medical leave of absence for six weeks from my Nursing Administrative duties, and my second place of employment as a Behavorial Health Counselor, the setback to run in Ohio, a marathon, which I have not missed in years, and physical strain and pain when training for the New York marathon under limited mobility of a leg.

Then the physical therapy sessions three times a week, before and after work to learn to walk properly once again.

In the process, I had to postpone running until I received medical clearance from my Orthopedic.

The day of the New York Marathon 11-06-22, I had to make a split decision with my running group to run the entire marathon 26 miles.

In my mind, I wanna to say, ‘just screw it’, and go back home, not to forget all the training and I did, at that point in time, I did not want to let my running group down, who have stood by me and was rooting for me to cross that finish line, rain or shine.

In addition, I suppose it was that Aquarian stubborn pride and tenacity that propelled be to keep a brave face, knowing I only trained comfortably to run thirteen miles and could only push my ankle no more than eighteen miles, then I tap out, the throbbing and tightness set in, then to topple the equation, aunt flow made her visit, slightly cramping and bloaty.

I looked at all runner faces, and wondered what their story was, did they have butterflies in their stomach like me. I did not want to embarrass myself by stopping in the middle of a marathon, which I was going to, in the beginning, until the rules changed, and I was not prepared, my self-confidence was on the line.

I had to either run the full marathon or forfeit, since the official half marathon is usually in March, which we knew that, but I wanted to pace and run and then fade to the sidelines, but my finished time would not be officially counted, which was fine by me.

I ran slower in the beginning testing my durability I did wear my ankle brace for support, as a friend advised me to do...

Oh, my goodness, I made it to the twenty miles, grimacing, because I knew the remaining six miles was not in my reach. I walked a mile with my running coach, as he suggested, and I knew he was being a great sport about his own declining pace and finishing time, then I did a giddy up run (run and walk, run, and walk) and then ran in so much pain to make myself look good once I cross the finish line.

I end up running a full marathon in four hours and fifty-two minutes, two hours slower than my qualifying time.

I cried as I was walking to bring my heart rate back down, because sometimes when you are set to do something than what was planned, and you surpass your expectation it is the sweetest and most memorable rewards.

I was going to stop altogether, and just chalk up this marathon as I tried, until I saw Chelsea Clinton, Ashton Kutcher, and a female anchor from the morning news … running past me... and I got a new feeling, of competing to the end.

I am off today, thank goodness... but I did complete all twenty-six and three miles (26.3) it seems so surreal because I really was prepared to run for thirteen miles and it's ironic in the end I completed a full marathon, with a slow time of course, but I did it... wow...

Next year, if it is the Creator's will, I will be at the starting line ready to compete in the New York Marathon at full capacity.

Written by SweetKittyCat5
Published 7th Nov 2022 | Edited 8th Nov 2022
Like This?
Poems by Author
Author's Note
The above picture was taken on March 04, 2022, in my first initial stage of recuperation.

SKC
Comment
#courage #determination #passion #SelfReflection #strength
All writing remains the property of the author. Don't use it for any purpose without their permission.
likes 6   reading list entries 0
comments 17   reads 293
Commenting Preference:
The author is looking for friendly feedback.
Re. My Life Through My Eyes... (Proverbs)
Solomon_Song
7th Nov 2022 5:54am
Bravo, well done. The picture did initially mislead me as it made me think there had been a setback and you had not  achieved your run. Chelsea Clinton and Aston Kutcher (Demi Moore's ex) - wow you were in good company..

This is the first time I have ever realized the strength of running, not just to say I competed, but to feel the rewards of completing to the end, and I would be fabricating the truth, if I say it was easy, excuse my tone, but it was hard as hell.. and my poor ankle was just along for the painful pounding. but all in all, I made it.. and I sometimes think back to yesterday and the ambiance of the moment... I do not know how, other than the grace of my Creator.

Thank you for reading and the uttermost respect with your praise.

Enjoy your Monday evening and have a blessed Tuesday.

Read poems by SweetKittyCat5
Re. My Life Through My Eyes... (Proverbs)
PoetSpeak
7th Nov 2022 10:48am
A true test of human endurance and will to achieve.
Completion rather than time taken to finish is proof of commitment.

Re: Re. My Life Through My Eyes... (Proverbs)
SweetKittyCat5
8th Nov 2022 00:16am
Ahhh.. you have made my evening, my Big Apple, and any reverence of merit coming from you always softens my heart, I am bowing to you and with a virtual hug...

I had the humblest pleasure of running/walking/running through those five boroughs... and when I ran through Central Park, it seems like time had stopped, and at that point you realize you are halfway there, and to me that seemed like the longest miles, mainly when you are running and in excruciating pain, wanting to stop but you keep going...  thank goodness my running coach sacrificed his own time to make sure I crossed that finish line.

Thank you so much for the beautiful acknowledgement. in addition, please enjoy your Monday evening, and may a rewarding Tuesday find you and keep you 🍎

Re: Re. My Life Through My Eyes... (Proverbs)
SweetKittyCat5
8th Nov 2022 00:26am
With such a caressing and admiration for any runner and the passion it may evoke, the only response I will tenderly offer to your eyed, is a heartfelt," thank you" that sentiment was stated and sincerely meant from the bottom of my heart, my poet.

I do hope you have enjoyed the fruits of your labor on this Monday, in as much, I am wishing you a magnificent Tuesday in all you do and the truth to be taken in all you say.

Re: Re. My Life Through My Eyes... (Proverbs)
SweetKittyCat5
8th Nov 2022 00:41am
That accolade rings so beautiful and is appealing to my eyes, and moreso, even sweeter for a journey I thought I was well prepared for, then surviving the unexpected of completing full marathon...

When I write that I am perplexed of the unexpected outcome... if only you knew I trained to run for thirteen, miles, half the distance, due to my ankle injury in February. I got to twenty miles with sheer determination and mental grit and then to push a sore and swollen ankle for six additional miles... totally unbelievable, and I feel good and for you to have taken the time to help celebrate in my feat, means so much to me.. thank you, truly, my King..

On that soft note, have a restful Monday evening, and as you awaken may you be blessed with universal gifts for you and enough for you to share.

Read poems by SweetKittyCat5
Re. My Life Through My Eyes... (Proverbs)
nutbuster (D C)
7th Nov 2022 10:12pm
very proud of you my dear friend you finished something you really wanted not to do took never to running the full Marathon congregations you won not the race but your mind  and body of pain

Re: Re. My Life Through My Eyes... (Proverbs)
SweetKittyCat5
8th Nov 2022 00:51am
I am so glad it is over, my friend, and I did take your advice to run in my ankle brace, it made a tremendous difference; it aided in the support of not placing too much pressure when pounding the pavement for twenty-six miles.

Subsequently, you have always been in my corner with kind words of encouragement, and they are always appreciated.

The day is slowly drawing to a conclusion; therefore, I wish you a very relaxing evening and a wonderful Tuesday in the making.

Read poems by SweetKittyCat5
Re. My Life Through My Eyes... (Proverbs)
Phantom2426 (Francisco J Vera)
8th Nov 2022 2:44am
Well done my Queen.  You can do anything you put your mind to.  I will always support.  Keep on writing  my Queen.

Re: Re. My Life Through My Eyes... (Proverbs)
SweetKittyCat5
8th Nov 2022 3:20am
You have always believed in me, and take into consideration, that support is genuinely cherished, my handsome poet, always.

Please continue to enjoy your Monday evening and have a spectacular Tuesday, and may you be greeted in peace and surrounded with people who serve the greater good of your needs.

Latest Forum Discussions
COMPETITIONS
Alive in Memory
Today 11:56am by skg373 (Cera)
1234
COMPETITIONS
Frustrated
Today 11:54am by Her
COMPETITIONS
Funeral: The Last Rites
Today 11:14am by DanielChristensen (The Fire Elemental)
1234
SPEAKEASY
Official DU NaPoWriMo 2022 Discussion
Today 9:49am by PoetsRevenge
1 ... 5051525354
SPEAKEASY
SHARING THREAD spiritual paths , sites, books and  events
Today 5:13am by Rianne
12345
COMPETITIONS
Me
Today 4:53am by Michael_Goodridge (Mickael Abdul)
123
Follow Us