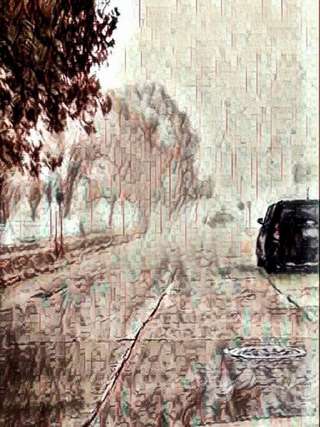 She stood in her driveway power smoking
a cigarette, Watching as night met the day.

She doesn't sleep much.

No dreams.  No nightmares.

She tossed her cigarette into an old coffee
can and called the stray cats she's been
feeding.
Ladybird! Mike Morris! Bowbandie!

All 3 came running as she popped open two cans of tuna, of course, she got tuna juice all
over her pants and hands but the kitties
didn't mind as much as she did.

She walked over to the dewy grass and
wiped her hands in it.

That's when something behind her garage
caught her eye. She finished cleaning her
hands took maybe 3 steps and then she
stopped.

Is that a dude? What in the fuck. She got
closer, it is a dude! She loudly said, Hey!
No response. She took another step
another loud hey, and nothing.

One more step and she was close enough to
see his face. He was dead. It was obvious.
a bile like yellow foam type of crust covered
his mouth.

She backed up, but couldn't remove her
eyes. She didn't blink she just stared.

He was sitting up against her garage
wearing a dark blue, red striped coat,
his jeans were dirty and ripped in the knees,
his shoes looked brand new. No dirt.
very clean. Too clean.
his face, contorted, mouth hanging open
and his eyes, wide open and in a frozen
stare, looking with nothing. He was empty.
She was looking at a shell.

She stared at his shoes. She couldn't move.

She broke from her trance and ran,
she slipped on the dewy grass but caught
herself and kept going. She couldn't get
her door open fast enough, and she
slammed it shut.

Her phone felt like bread, squishy and she
tried to unlock it but the numbers were
looking like letters and she had to stop
and breathe, then finally,

She went outside and sat on her porch
smoking again. The three cats also joined
her. She waited for sirens.

She was on her third cigarette.
The cats were unaffected.

"There's a dead man in my backyard"
she said in a small whisper and repeated
It again and again.

The sirens had arrived.
An Ambulance, Fire truck and the Fuzz.

She told them where to go. She did not
follow.  She gave a statement and lit up
another cigarette.

Then a black van came.

A medical examiner rushed by her.

She heard squeaky gurney wheels rolling
towards her down the rocky driveway.

She lifted her eyes to see the bag that
carried the man who died in her backyard.

They stopped to tighten the straps,
put him in the truck and shut the doors.
They drove off. The medical examiner left.
The cops and fire men were talking near
the cars.

She smoked another. She couldn't believe
what had happened.  A dead guy.
someone's someone. A tear fell.

She heard the cops talking and one of them
said, "didn't that lady smell like tuna?"
the other said "yeah, gross."

She put her cigarette out in the old coffee
can and went inside to change and wash
her hands.

Written by nikkimoe
Published 29th Oct 2022
Like This?
Poems by Author
Author's Note
My photo.

The 7 cents reference is from stand by me when they were going to see a dead body. Brains are weird and go weird places when one is stressed .
Show More
My photo.

The 7 cents reference is from stand by me when they were going to see a dead body. Brains are weird and go weird places when one is stressed .

1st and probably only Rough draft just wrote it now.
Show Less
Comment
#death #unicorns
All writing remains the property of the author. Don't use it for any purpose without their permission.
likes 16   reading list entries 7
comments 19   reads 173

Glad you understood the reference 😊

Read poems by nikkimoe
Re. He Wasn't Wearing Keds
Styxian
29th Oct 2022 6:03pm
I absolutely love all the intricate details of this write.  It's a solid full meal of mental nourishment.  All the little nuances that make it so plausible, so "routine except for".
You could have carried us readers all day, easily, with this.

If this is a rough draft, holy shit you have a very smoothly sanded  brain.

Re: Re. He Wasn't Wearing Keds
nikkimoe
29th Oct 2022 6:11pm
Super cool compliment I appreciate it.
Short stories used to be my thing.

Obviously they still are.  You're excellent at it.

Read poems by nikkimoe
Re. He Wasn't Wearing Keds
JusTim_
29th Oct 2022 6:10pm
Just another day and one more reason to lite one up...I caught the Stand By Me ref. right away..well placed

Re: Re. He Wasn't Wearing Keds
nikkimoe
29th Oct 2022 6:14pm
Thank you 😊
My sister and I watched that movie so many times I know almost word for word.

This grabbed my attention and kept growing into an avalanche.
You kept the pace going til the end amiga. What a pleasant surprise:)
I remember you mentioning how you used to write longer pieces - so glad
I got to read one.

Read poems by nikkimoe
Re. He Wasn't Wearing Keds
Bluevelvete
- Edited 30th Oct 2022 1:50am
30th Oct 2022 1:48am
This was one of the best things I've read here on DUP in awhile. I was immediately immersed and caught up in the feel and atmospheric heft your pen surrounded me in. This was such a great shout out to a classic King story where the movie was as good as the book (or better) for me. I too, have watched it a million times.... Poor Vern! He hadn't found his pennies yet!! ;p

I so love your minimalism but this really blew my socks off, Nik.

Sublime work, especially as a rough draft- Holy hell that's astounding!
Thanks for putting it out there.
I very much appreciated where you were coming from and found it to be an incredibly good read.

Wow! Gripping! Spell binding! Not a word wasted throughout this write. Character development and storyline were outstanding. Loved the wry humor amidst the dark plot of the write. Thunderous applause. H🌷

Re. He Wasn't Wearing Keds
Cipher_O (Zero_Stillness)
1st Nov 2022 9:08am
This piece gave me the feeling of monochrome on a flat surface...

(Have Hoosiers on in the background...

Re. He Wasn't Wearing Keds
wallyroo92
16th Nov 2022 8:59pm
Excellent narrative and scenario. To conjure the thoughts in a such a situation is difficult, and yet the closing lines add a bit humor as to what the mind can do to cope.
Great work.

Latest Forum Discussions
COMPETITIONS
Funeral: The Last Rites
Today 11:14am by DanielChristensen (The Fire Elemental)
1234
SPEAKEASY
Official DU NaPoWriMo 2022 Discussion
Today 9:49am by PoetsRevenge
1 ... 5051525354
COMPETITIONS
Frustrated
Today 7:17am by DevilsChild
SPEAKEASY
SHARING THREAD spiritual paths , sites, books and  events
Today 5:13am by Rianne
12345
COMPETITIONS
Me
Today 4:53am by Michael_Goodridge (Mickael Abdul)
123
POETRY
Poems that mean something to you
Today 4:08am by Casted_Runes (Mr Karswell)
Follow Us