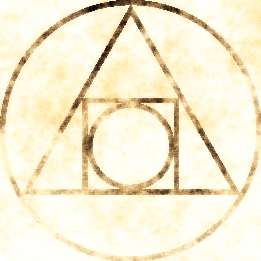 Some believe in chance, others believe in fate
But Janus is the guardian at the gate
There's the key ere the cock crows
Comes the night and curtains close

What is life but a waking dream
And its dreamers of dreams that truly speak
Bottled fire bound within clay
The circle squared as they say
Compass, square and plumb, just beyond reach
Found deep within the temple's keep
Because we don't look within
Its always elsewhere that we seek
Someone, something, somewhere
Remember "ME" the kingdom lies within
Third eye blind
The wilderness lies without
Know thyself

Its said all the world's a stage
Then symbolism's everything
Discover what a symbol means
And your closer to knowing its true name
Knowledge is power but wisdom rules use
Flesh and blood the sacrament to keep
Osiris's phallus the fish did eat
Intersections and interconnections
From Egyptian fish and the resurrection
Proto-Sinatic sign of a fish meaning Dalath (door)
As numeral, its placing, the number four
Phonician looked like a rough triangle left faced
Ancient Greek a triangle called Delta was traced

The triangle of manifestation within the temple hid
Three planes, physical, mental, astral
As above, so below
Triangles the star of David creates
Within, the hexagram, Solomon's seal
Do you know what power it wields

The throne of Divine Glory was standing in space, hovering over the face of the waters by the breath of the mouth of the Holy One, blessed be He, and by His command, even as a dove hovers over its nest. (1)

Out of Egypt have I called my son

In Egypt monumental triangles as pyramids raised
The great pyramid of Gaza aligned with Sirius
The light bathing there the square stone of God
At the dog star's Son/sunrise
The High priest aglow in this world and next
Come the dog days of summer
Forerunning the Nile's flooding
The New Year
The sun behind our sun
The light behind the all seeing eye
It is the blazing star, the sacred place
To which initiates seek to ascend
The sun of the south which enlightens the mind
The gate to the heavens and the other side
Sirius the dog star
Dog the anagram of God

Our Life is a dream. But we wake up sometimes, just enough to know that we are dreaming.” ― Ludwig Wittgenstein
Show Less
Comment
#LifeCycle
All writing remains the property of the author. Don't use it for any purpose without their permission.
likes 4   reading list entries 2
comments 4   reads 156

This is where your mind takes you? If I wrote where my mind took me it would read more like a disheveled shopping list with many many distracted spotlights on snacks. 🙄
I thoroughly enjoyed the poem and its histories of god and man and symbolism. The rhyming gave a great tempo and rhythm but back to the history of the subjects within, I found truly interesting. That’s what my rambling mind thought. 😊
H🌷

Janus is Peter, the gatekeeper. One minute Christ praises him and gives him the keys that the gates of hell shall not prevail against, the next minute he's being told "get behind me Satan."

The cock crows at dawn not at the close of day for gentiles. Peter denied three times before the cock crowed at dawn the day Jesus died. Remember, Hebrews had a lunar calendar. As it says in Genesis,"And the evening and the morning were the first day." Here morning/(mourning: Peter wept bitter tears) marks the end.

Offering of a rooster at death (the final great initiation) was customary among the gentiles. As you can imagine, the cock's crow signaling the awakening/resurrection. Socrates said before his death,"Crito, I owe a cock to Asclepius; will you remember to pay the debt?" Asclepius was the god of healing, son of Apollo

I could have been plainer or gone into more depth but people's eyes tend to glaze over. So, tell me more about snacks... 😁

Read poems by AverageJoe
Re: Re. Symbols
Honoria
7th Oct 2022 8:18am
It’s been a very long time since catechism class and I can’t fib, I didn’t pay attention very well either. There were too many names and villages I really couldn’t pronounce. But I really like receiving the abridged versions of biblical stories and history. Highlights. I’m good with those. I’m better at snacks. I was thinking Pringle’s, popcorn, m&m’s and double stuff Oreo’s. Can I tempt your fancy with any of that? 😉