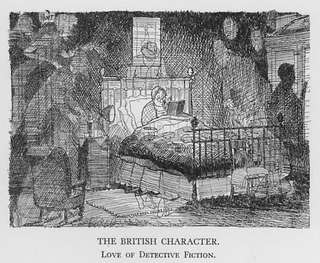 “He recalled again the moment of arrest. Pooley had been such a small man, small, ugly and stinking with fear. His wife had left him a year before and the inexpert patch which puckered the elbow of his suit had obviously been his own work. Dalgliesh had found his eyes held by that patch as if it had the power to assert that Pooley was still a human being.” - PD James

The pleasures and retreats
for me have always been
poetry and crime fiction.

Obsessed by death, morality,
suspense and fear,
the pities and the terrors of
the many-chambered human heart,

the mystery stands out
(when it’s done well)
as capable of poetry,
as much as anything.

The narrow boats of soul
and personality drift on,
possessed by writer’s craft
and reader’s interest.

A story’s crime is like a poem,
a cataclysmic act
in either size and consequence
or merely moral worth
lain out in sentences,
drawing as water from the well
an order from the disarray,
a system from the brute decay
of death uncivilised.

Written by Casted_Runes (Mr Karswell)
Published 3rd Oct 2022
Like This?
Poems by Author
Comment
#books
All writing remains the property of the author. Don't use it for any purpose without their permission.
likes 2   reading list entries 1
comments 1   reads 66

Commenting Preference:
The author encourages honest critique.
Re. Poetry and crime fiction
Strangeways_Rob
3rd Oct 2022 10:52pm
It's definitely interesting to read what has inspired folk. Any community should be happy to share.

I old enough to remember Tales of the Unexpected first time around. In hindsight, they were fairly whimsical & tame (The Flypaper excluded perhaps). Definitely opened a darker world and this can show deeper human truths.