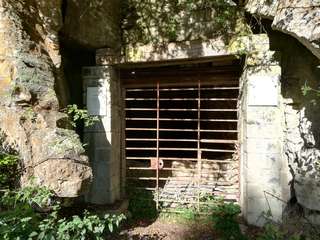 In The Depths Of Darkness

Behind the bars, in the domain, of the dark and damp
You might see, the ethereal glow, of the miner's lamp
But in the listless umbra, there'll be no shadows cast
For those who are there, are phantoms from the past

Some others, crawled through a hole, to wander round
Under the sinkholes, in the warren, beneath the ground
In the crumbling tunnels, they left their marks, in white
As they scribed, their cartography, by their torch's light

Oft, in eerie silence, they traipsed and had time to mull
And ponder on their peril, with each dead sheep's skull
Though they knew the ways, with their homemade map
The oppressive, cloistered darkness, would always sap

Through the months and years, they still chose to dare
Each time they crawled out, they would bless, fresh air
But then the end, was nigh and their map was finished
So they went in, one last time, but the light diminished

In the depths of darkness, vexed by an opaque malaise
Did they stumble through tunnels, that became a maze?
Perhaps they saw a familiar glow, atop of a rocky ramp
They thought was sunlight, but it was the miner's lamp

Behind the bars, where eroded, fractured roofs cave in
You might hear a forlorn, distant call, from deep within
But without torch, or lamp, there'll be no shadows cast
For those who still wander there, they're of the passed

Written by Xaphan
Published 21st Sep 2022 | Edited 10th Oct 2022
Like This?
Poems by Author
Comment
#childhood #dark #ghosts #myself #risk
All writing remains the property of the author. Don't use it for any purpose without their permission.
likes 1   reading list entries 1
comments 0   reads 203