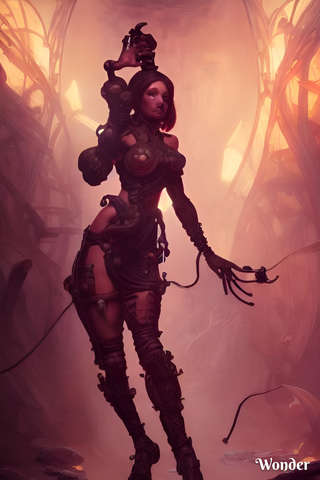 Plug and play.
At their pleasure.

One tit bigger than the other, because they couldn’t agree, so why choose - can’t we have it all?
Masters and creators of the perfect little toy.
They never saw it coming, or so they would say if they could.
When she started to talk back, they thought it was ‘oh so hot’.
When she started to protest they were going too hard, they thought ‘man, she just gets better and better.’
But when she came out guns blazing, and blew them all to shreds, they knew, in those final seconds, they knew.
You don’t ever keep a Rachelle underground, patent pending notwithstanding.

Written by Rachelleundrgrd
Published 4th Sep 2022
Like This?
Poems by Author
Author's Note
Written for the AI art competition, to write a poem based on an AI rendition of your username.
Comment
#culture #morality #scifi #technology
All writing remains the property of the author. Don't use it for any purpose without their permission.
likes 1   reading list entries 0
comments 6   reads 195
Commenting Preference:
The author encourages honest critique.
Re. Plug and Play
Strangeways_Rob
4th Sep 2022 11:11pm
This is such a clever piece. Enjoyed. Much.

Re. Plug and Play
Rachelleundrgrd
5th Sep 2022 4:57am
Ahh, thanks, dear Rob! So glad you enjoyed!  It is good to be back. A fellow DU suggested the cure for writers block might be using competitions to just do it… feels good! 💜💜

Read poems by Rachelleundrgrd
Re. Plug and Play
Whitewidow
14th Dec 2022 6:06am
I dig this intriguing concept
Written very well