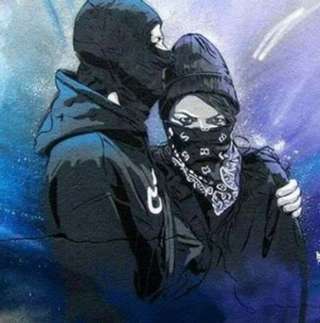 Bringing Down Scarface (It's Just A Matter Of Time  Part III)

Yeah Gee… that’s what I’m talking about, that so called undercover bitch trying to hustle the street as the top clit
Mask done slipped and letting the Cartels know the plastic looking swan hides behind a self-cartoonish facelift
And have the nerve to be talking cash shit
Not to worry, you know I don’t run when I clip wings
And who don’t know that about you, my Queen

I will heal a hoe’s ass up then snuff a poser out when singing they mama an enteral lullaby dream
Silly rabbit tricks are for kids
Trying to cook my dope without lifting the lid
Trying to shed that gangsta creed
At.. At.. At.. those book for dummies don't tell you the Nun Runner will make you bleed
I rule these streets here.. you can't creep where I do not what you to breathe
And when you do exhale, my Glock is the last piece you will see
I make the streets smile

Now I got to strap up and deal with a poser with thousands of phony hood profiles
Singing swan songs to stalk my A- game
Gee, the fuck is one obsessed dame
Throwing that old ass at some dick when the door has been bolted and locked
Sending in her twin to spy around the clock
My Queen, word on the street this poser is bad news
My type of enemy when I got nothing to lose

Water gun carrying wearing punk ass wanna be, I slice assess up while telling thugs to get up off their knees
Then make their blood the juice you best believe
Selling your organs, after my dog have thrusted and pissed on you at ninety degrees
I’m a nasty father fucker when you step on my land mine
You go down on my clock, my time
And fuck the reasons, whys, or the rhyme

You come correct and step to me like the hiding man you truly are
And stop hiding behind sticks and stones, so I can toss your ego up real far
And then shoot you down, gut your ass without even making sound
I can tell my Gee to step aside
Put my weapons in the back of my skirt, and let the street wars collide
Get up on stay down, you don’t want none of this
You just might get bit, or dog licked

One think about having education, and inclined to push drugs
Shh...I am the Ghost who infiltrates your mind… pushing my mental poison all up in you if there ever was
You ain’t got the memo, partner, a Queen B. do sting
Then shovel a fist so far up the ass, to make your cunt no longer sling
My Queen, my Queen, calm down you go the pardon
No need to boil tits in your mental cauldron
We are no longer in Florida, we got this, if we stick to the plan
You right, Gee, then death to a this poser who been sent to bring me down where I stand

We got the meeting with the Cuban Cartel tonight
If the talks don’t go right plug them with all your might
We got the Mexican dope its time we flip this cash, then head shot their ass
And if it sounds like they are sighing with the Russian Cartel then no one remain standing, take everyone out in plain sight   Then lock and reload and bust a cap for any feet trying to take flight

Gee, this is the dick or his bitch you went head to toe with, and parted ways, served him while he was in recluse
Hell yeah after I let my shell casings loose
Now he trying to up the street with his tainted Fentanyl cut dish
Its time I serve him a death wish
To give my duce, then his mama a red rose
While I spit on his grave as his blood seeping in dirt flow
How will we know it’s the fuck
A scar on the side of his face that’s what up

Done deal, Gee make sure you make the skin bleed
I want that poser to know he has been dealt for his arrogance and his greed

Written by SweetKittyCat5
Published 16th Jun 2022
Like This?
Poems by Author
Author's Note
You in my hood bitch....

The Nun Runner
Comment
#city #drugs #revenge
All writing remains the property of the author. Don't use it for any purpose without their permission.
likes 2   reading list entries 0
comments 2   reads 137
Commenting Preference:
The author is looking for friendly feedback.
Re. Bringing Down Scarface (It's Just A Matter Of Time  Part III)
nutbuster (D C)
16th Jun 2022 3:07pm
done deal say no more my Queen B this is for Gee to fix get in the wheels and roll