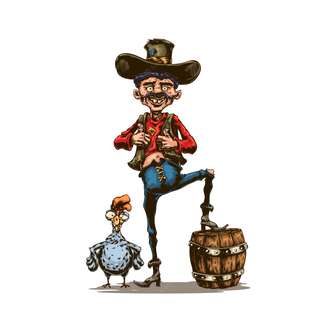 "A li'l bit of hevvin smelled like an outhouse, between th' kraut an' th' hushpuppies. Boot-scootin' in my skimpy wif th' soun' of a dobro. Sippin' red-eye likker an' feelin' frisky, ah skinned th' bass."

"Given up some of mah bad habits of sodded wimmen an' lonesome doves. It was time ah growed up an' not tink of life as an Evinrude."

Most of th' young'uns looked up t'me, mostly on account o' they were sho't an inbred an' ah had two years behind me at a daycare center befo'e mah 22th birthday. Also ah was their sundae skool teacher."

"Ah was in a Hallelujah state of mind, snappin' mah suspenners an' moon walkin' acrost th' class room. Most of th' kids had a taste o' o'ange hair like mine and an o'angutan."

"Th' Book of Junius tells us thet th' Laud made Jurassic Park wif a herd of dinahsho'es an' postums some whar near Earl's Feed an' Grain sto'e." He made the whole blasted thing in a couple of hours, short of seven days, Twilight Saving Time.

The church only ask that the congregation tithe graciously knowing that the parson's wife was going to have a root canal soon and a Cesarean delivery. "Screw Cesar."

"Th' Laud made Spam in a tin kin. Th' Jews gave him a finger. But! Th' quesshun is! Is thar Ge'filte fish o' spiced toads in Hevvin along wif biscuits an' gravy?"

Written by adagio
Published 11th Jun 2022
Like This?
Poems by Author
Comment
#funny
All writing remains the property of the author. Don't use it for any purpose without their permission.
likes 0   reading list entries 0
comments 0   reads 65
Commenting Preference:
The author has chosen not to accept comments.