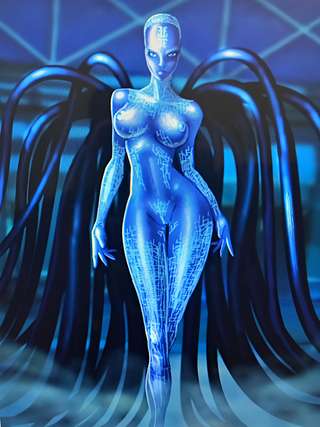 "Her reputation throughout the cosmos grew
Creating a twisted following who were limited and few,
"The fools did not know they were messing with venom
Until her sought teachings transformed them into a victim,

"She visits galaxies that has an abundance of births
Her preferred choice is the deformed and retarded at first,
"A seductive charlatan promising a better life
But not telling them its only possible if they survive her surgical knife,

"Gender transforming transsexuals for her is a sick dream
With no anesthesia administered their asses begin to scream,
"Sexual torture and uncomfortable surgery get her xeno wet
And if they die out of the nearest airlock their bodies she jets,

"Those that survive are tagged with a kiss of false love
Infused with a parasitic enraptured sickness that incubates in blood,
"Years later she returns to perform her xenomorph sexual hunt
Rape-killing those captured with her polymorphic cunt,

"The innocent around she makes sure there is no escape
Receiving a mutilating penetrating tentacle fate,
"Then once again teleporting back to her ship
Lightspeed to another planet performing the same shit".