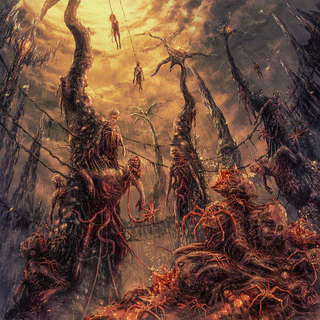 "Fake ass preachers who twist the words of the Bible
When they arrive in Heaven they are annihilated on arrival,
"Because God ain't trying to hear their fuck shit
Condemning them to Hell, becoming forever the Devil's bitch,

"Hardly anymore we hear about ISIS and the Taliban
No longer a news hot topic-so who gives a damn,
"But I guess it don't mean shit about our soldiers being dead
Or a president and his vice that's fucked in the head,

"Every aspect of life seems to have went pathetically down
Guillotine beheaded and left dead on the ground,
"Executioner tactics political style
Another nationwide riot is coming-just wait awhile,

"Understand the sun don't shine inside wet pussy
Only on the squirt when it's set free,
"Unless it's nighttime or in the dark shadow
Then enjoy the liquified gift from a talented poppin-pussy ho',

"It ain't nothing but good sex crying
But never the same when a loved one is dying,
"Unable to do shit but talk and hold their hand
While other family members make funeral plans,

"The thoughts alone are unwanted bullshit stress
Like a rapist trying to get pussy buried deep under a dress,
"Teary-eyed afterwards and uncomfortably able to rest
Now forever more your a mental fucked-up mess,

"Feeling the full effect of the twisted extraction-it hurt
Because it seems like under a eclipsing sun we put in work,
"This analogy to many may be considered dark
Just like wet shit decorating draws when a motherfucka fake fart".

Written by CasketSharpe
Published 25th Jan 2022
Like This?
Poems by Author
Comment
#dark #humankind
All writing remains the property of the author. Don't use it for any purpose without their permission.
likes 3   reading list entries 2
comments 6   reads 161

Commenting Preference:
The author encourages honest critique.
Re. Motherfucka Season (Extraction from the Twisted Womb) Part IV
Beholder
- Edited 30th Jan 2022 00:24am
30th Jan 2022 00:23am
With so many reading and not commenting shows they enjoy being hotwired to the bullshit. But everyone has their own individual free will.

Re: Re. Motherfucka Season (Extraction from the Twisted Womb) Part IV
CasketSharpe
30th Jan 2022 3:12am
Only time will tell. Thanks for your honest comment.

Read poems by CasketSharpe
Re. Motherfucka Season (Extraction from the Twisted Womb) Part IV
Bluevelvete
30th Jan 2022 7:10pm
Our (humanity's) utter lack of 'stick-to-itiveness' when it comes to keeping the 'collective mind' in a state of awareness to the truth surrounding, is beyond maddening, sad and at times, mind boggling.... It's a direct result of mainstreamed version of ADHD mixed with sheer laziness.
We're used to being spoonfed everything. If it's not about instant gratification, it's not worth it, right?!? I say sarcastically..

To figure out how to maintain people's attention spans is to really bring about social changes... until then, it's doing as much good as you can, while the spotlight shines.... Perhaps pessimistic but realistic.

Your analogous alliterations are amplified so cleverly by your brazen, no holds barred 'attack style' of writing.... I marvel at such cool, adept strength in the way your brilliantly paint your mental imagery, to create like you do.

Re: Re. Motherfucka Season (Extraction from the Twisted Womb) Part IV
CasketSharpe
31st Jan 2022 7:33am
Maybe the truth will open someone's eyes or not. It may depend if they can look past the harshness of my expression and fully understand its meaning.

Read poems by CasketSharpe
Re. Motherfucka Season (Extraction from the Twisted Womb) Part IV
I_IS_ME
1st Feb 2022 2:16am
Dude you're a wild man, this piece walks down so many avenues of truth. You hit on so many topics and yet maintain the flow, tight work dude

Re: Re. Motherfucka Season (Extraction from the Twisted Womb) Part IV
CasketSharpe
1st Feb 2022 11:43am
Thank you. We all know the truth can be a motherfucka at times.