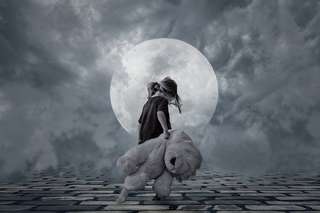 The labyrinth of deceitful deities we give allegiance in the merit
Cubic zirconia never to reach that five carat
Blacken expressions of buried insight prowling on earth in this time
To bring the four corners of the world to one existence not found by its obliviousness's designs
Confusion, cruelty of the spiritual creed to give credence to intellects to remain strong to believe
Lackluster words to encourage the deep seas or the earth to move
Too inexperience by rite to cuddle society in the valley of the shadow of death only loud mental frailty speaks the blues
Ideology patented from the back of muesli boxes to take comfort in
Hypocritical knowledge in the stench of hellish sin
In the cathedral of Buddhology quiet heads bowed to the communion incense slowly burns
Falsehood kneels at the altar, lack of knowledge churns
A low energy vibration not worthy or voracious enough to give the masses what they need, yearn
In the realm of time, uplift toward the radiant light to tell of stories before the silence of the Grave or the Urn

Give me liberation from the tongue of confessions of ancient scrolls foretold
Tell me something I do not know of old
Live within the beautiful mural of the mind to tell listening souls of the Native’s loss of sacred land
Smallpox invading reservations not by their hands
Scrambled words trap in the filth for which a disability mentality homes
Hindered and lost in the maze when you cannot even begin to understand how we all can atone
The world still waiting for that enlightened one
Black, white, brown where have the theological or superiority gone
Yoruba Religion of that old soul sings divinity’s songs

Judgmental holds no merit to the wind
It only blows out heat when flames ascend
Scribbled ideas devoid of sanctification by the blessed stars
The imagination when at rest, thriving, it can stretch wide and far
Darkened in unrest, demigods’ hovers, ideology misplaced where it larks
Most dimwitted beings are so selfish to know how to teach
Quicker to the slaughter for the ones who stand, fall, and get back up to testimonial preach
Valor, deliverance becomes the emote from what you have wrote
Yet still a celestial sleeper if your mind is not fully awoken
Open the door to the world and step outside and reach of greater significant once spoken

Scream to the mountains behind the sheets that once marched in streets
Compassion in echoes, let me hear reflections like you laid in those gas chambers
Unlock the mystical doctrine of the Three Kings’ travels to witness the myth or miracle laying in the manger
Can your mind even yonder your ponders beyond the stars, skies
Do you even know your purpose seen through the Creator’s eyes
Can your spiritual chant in the grace of universal rants
Bow to the muses to hear your ancestral’ s guidance to tell you, renounce the word, I can’t

If you are not one with self, the universal, the axis as it shifts
You will never be able to wrap your mind around the concept of any of this
Step aside, too many souls vying for that beautiful ascending gift
Neuf vies eight asunder a tabby spurned in hell
Solve the sovereignty of existence to riddle of life’s puzzles without the whys, the one Heaven cannot seem to sell
In the feast of obscurity, we are all the same, whereas one could never tell
To the eyes that see and ears who hear
Society’s paroxysm child who wavers unjustly to laminate a jester’s tears
Are you the rumbling storm, a roaring thunder to conform
Cradle in the bosom of the art to know thy truth is the mouth that readily speaks
Freedom from the prisoned idle mind which that does not

Written by SweetKittyCat5
Published 15th Dec 2021
Like This?
Poems by Author
Author's Note
Let us remember: One book, one pen, one child, and one teacher can change the world.

Malala Yousafzai
Comment
#culture #philosophical #religion #spiritual #TruthOfLife
All writing remains the property of the author. Don't use it for any purpose without their permission.
likes 5   reading list entries 3
comments 9   reads 221

Commenting Preference:
The author encourages honest critique.
Re. Society’s Paroxysm Child…
nutbuster (D C)
15th Dec 2021 3:06am
my friend parts of this is way above my head in time it shall all become clear to me at that point I well know what is being told in these lines what little I got was and insite to thetruth of life

Re. Society’s Paroxysm Child…
Zazzles (Broom)
15th Dec 2021 3:15am
I will be back tomorrow to give you a proper comment loves you lady!
♥️♥️♥️
Jackie xoxox

Re. Society’s Paroxysm Child…
Phantom2426 (Francisco J Vera)
15th Dec 2021 5:20am
Teachers can change the world.  We need to find our way to change the world for the better.   Keep on writing.

Re. Society’s Paroxysm Child…
Zazzles (Broom)
- Edited 16th Dec 2021 1:42pm
16th Dec 2021 1:38pm
I absolutely adore this piece. Your mind works like an intricate finely tuned machine of beauty. I love the science  behind your thoughts here and the message is one thats been on my mind for a very long time. I enjoy the way you play with your words and place them just so, enticing and leading the reader along the journey you paint so well. To ponder, hmmm 🤔  it’s what we do, I don’t think the answers are easy to find, I think it’s part of evolving and we will know when we get there or not? Hmmm 🤔


This particular part threw me down hard, the reality of what you put here, it’s just amazing how you do it, you’re fucking awesome chic!

>>Solve the sovereignty of existence to riddle of life’s puzzles without the whys, the one Heaven cannot seem to sell <<<  POW!

truthfully the entire poem is profound, thought-provoking and wonderful, I really enjoy this piece.
Loves you kitty 🐈‍⬛ 🌹
Jackie ♥️♥️♥️🤗

Re: Re. Society’s Paroxysm Child…
SweetKittyCat5
20th Dec 2021 1:47am
Returning to my cavass and seeing such a beautiful affirmation, I can only bow to the wondrous spirit that has taken you the required time to acknowledge with such a gracious accolade.

My poetess, I have truthfully learned in my self-pondering absence; we are the master of our own fate, and we thrive to extend our humbleness through intellectual ideology and spiritual manifestations by faith as this world evolve daily.

No two people on this earth will ever be the same, neither the self-perseverance of their journeys. Once we can grasp the meaning of our own presence and not hinder the path of other, this word will be adaptable for everyone to cohabit.

It is always rewarding when you grace my musing, thank you, sincerely

In the feast of obscurity, we are all the same, whereas one could never tell
To the eyes that see and ears who hear
Society’s paroxysm child who wavers unjustly to laminate a jester’s tears
Are you the rumbling storm, a roaring thunder to conform
Cradle in the bosom of the art to know thy truth is the mouth that readily speaks
Freedom from the prisoned idle mind which that does not

Re: Re. Society’s Paroxysm Child…
SweetKittyCat5
20th Dec 2021 1:57am
Ahh... you are such a sweetheart in merit to grant me with a gifted honor of recognition. Your words and point of views are awesome and truly honorable, once again thank you

Enjoy the moment in time, always

Read poems by SweetKittyCat5
Re. Society’s Paroxysm Child…
I_IS_ME
17th Dec 2021 3:32am
You're amazing as always with your skills Lady. We would or could delve into this and maybe we will with you in our own way. But Zazzle being the gracious soul that she is has really grace this piece. You're incredibly tight Lady

Re: Re. Society’s Paroxysm Child…
SweetKittyCat5
20th Dec 2021 2:24am
You have me smiling from ear-to-ear. You are known to always scribble the most uplifting comment on my canvas, a welcoming compliment I can take comfort in and the austerity for which it was thought, is always a blessing.

In addition, thank you from the bottom of my heart for taking the time to read

Please enjoy this late evening as it slowly fades into the wind. Have a spectacular upcoming week you