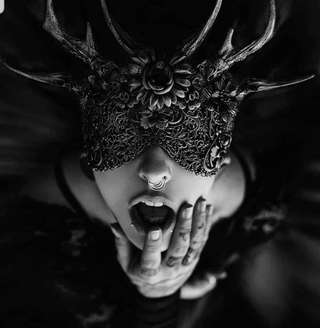 Lurkers, conversationalists, lovers and who really gives a fuck because your karma is coming…

He asked me why I was single, and I nearly choked on the rosemary & thyme marinated lamb shank & steamed vegetables that I’d been chewing on as his eyes pinned me to the wall of his.

I pondered for a split second whether or not to change the subject, tell a white lie, or shoot him straight in the heart with the truth, given that’s my mode of operandi when engaging in a deep & meaningful.

Particularly, when speaking my truth as an inquiring mind is delving into mine to find synergies within his own as we engage in a dialogue to learn more about one another to establish those checkpoints that become touchstones, later on down the track.

It’s a beautiful thing to behold, when exploring the depths of another soul, knowing there’s good intentions and a shared understanding & desire to unearth the unknown, together.

Only god knows how much heartache & psychological distress I’ve endured whilst searching this earthly plane for my beloved twin flame.

I thought I saw him whilst gazing into the fluffy but light bed of mashed sweet potato that the lamb shank was lying on top of as I felt a smidgen guilty for eating meat. Evidently, my battle to fully transition to a raw diet is still a battle.

The more I eat meat, the guiltier I feel for the sacrifice that had to be made just for me to fill my belly but I’m still working on becoming a vegetarian as I’m convinced that there’s a correlation between meat, and cancer, given that meat has been flagged as being a carcinogen.

I believe its got something to do with the methodology harnessed whilst killing an animal that then makes the animal release toxins into their bloodstream, and then, we eat that toxic meat none the wiser that each mouthful is one bite closer to triggering karma for partaking in such cruelty, when we could’ve chosen something more organic & plant based.

At one point, I was convinced his mother aborted him in this lifetime, and that’s the reason why I’ve to wait until the next one, for us to cross paths again.

Noting, that this lifetime has been full of life lessons from men who’re in need of healing from the wounds another has inflicted upon them, and they know not what their heart is for as they replay the same lessons from past relationships, whilst making me suffer for their wounds unseen, oblivious to their own internal sufferance & pain.

A relationship can’t truly flourish when it’s built upon that kind of framework, and we rarely come out the other side, unscathed; whilst feeling nourished or nurtured.

I told him that I was sick & tired of meeting narcissists, and he understood whilst validating his own encounters with such, and we both laughed & changed the subject, for a brief moment.

I don’t think he likes the fact that I don’t need him, or anyone else for that matter, particularly if all they’re about is BS. He’s not into BS, and that’s a good thing as I kinda like his ability to soothe my raging inner tidal waves.

Don’t get me wrong, I’ll help anyone to unpack their BS but I won’t be an enabler, by allowing one to project their BS onto me whilst making me suffer as that’s not healthy, and nor is it acceptable to tolerate.

I mean, when I chose to leave the father of both my children, he said you can leave with your clothes, your car and both the children, and so I did without asking him for ongoing child support, or anything else for that matter as he wasn’t even capable of nurturing his own self, properly.

Let alone the many other children he created with other women, prior to ours. Aargh.

To be frank, I just couldn’t see myself raising children with a drunkard who developed a proclivity to become extremely violent, and ever so apologetic the next morning when he’d sobered up to the fact that I refused to cover up & lie about the black eyes that shone through beneath a concealer and a darker shade of foundation, when he decided to gift me with such.

That pain still sits upon my heart but I’m not afraid of calling a spade a spade.

Albeit, it’s as small as a thumbtack but it’s there and I’m fully cognisant that I don’t need another violent relationship as I learnt way too many lessons from that particular one, to never make the same mistake again.

Oh. The trouble we find ourselves within, and the lurker that’s been violating my rooftop will soon find himself in an awkward situation when I squirt some kind of accelerant up there, and set it alight whilst he’s stalking me.

I just can’t fathom the concept of others interfering in the lives of people who want nothing more to do with them, or breaching the boundaries of people they know nothing about but that’s another story, for another time.

So. I know all about the roof lurker from time gone by, and his antics are the same, noting the dogs and I aren’t impressed.

On another note, we finished dinner, shared dessert and made plans to do it again, soon.

I wonder if he’ll ever tone down the formality he sets between us as I’m more of a walking barefoot along the beach type or girl as opposed to donning formal dress attire, mostly.

There’s a time & place for everything.

However, I’m definitely more comfortable sitting on a blanket with a few drinks, and a platter of crackers, soft cheese, cherry tomatoes, carrot & celery sticks & dips around a bonfire in the middle of nowhere, and hopefully that’ll be a turning point for both of us.

He loves my simplicity, and I love the calm & depth that comes from deep diving into him, and his knowing, whilst others are doing what they’re doing, in the dark.

Luckily, we spent some time meditating & clearing the negative energy that’s been coming my way from the callous demonic so & so’s who have no idea who’re they’re fucking with, whilst spinning lies & intentionally interfering with peoples lives.

People, they know absolutely nothing about as they attempt to portray themselves as innocent bystanders when all their dark deeds are being dragged out into the light for all to see as their guilt is determined, and judged accordingly !

I abhor people who do such things and I’ve been more than tolerant & understanding to date whilst thinking they know no better but I can see clearly.

Clear enough to see & know the evil that that cohort continue to do whilst cloaked in the dark, noting that what’s done in the dark, always comes to light.

It’s only a matter of time.

Karma, and god will always take care of such as I’m protected; ancestrally, by the light.

Written by shadow_starzzz
Published 31st Oct 2021
Like This?
Poems by Author
Author's Note
https://youtu.be/20Ov0cDPZy8
Comment
#narrative
All writing remains the property of the author. Don't use it for any purpose without their permission.
likes 4   reading list entries 3
comments 5   reads 100

Commenting Preference:
The author encourages honest critique.
Re. Lurkers, conversationalists, lovers and who really gives a fuck be
Stoney223
31st Oct 2021 5:25pm
Wow this piece is thought provoking and it grabs your undivided attention real talk straight up on the rocks for karma is a double edge sword 😉👊

Re. Lurkers, conversationalists, lovers and who really gives a fuck be
Bon_Mot
31st Oct 2021 6:09pm
A very, very well composed piece.   I would imagine that the circumstances you described are a sort of "occupational hazard" for beautiful, intelligent women.  No?  I make a concerted effort to act considerately, when I see men committing the types of faux-pas you mentioned. It must get boring, frustrating and "old" pretty quickly.   Again, a good piece (and possible required reading for males with scraped knuckles! :-)

Re. Lurkers, conversationalists, lovers and who really gives a fuck be
Phantom2426 (Francisco J Vera)
31st Oct 2021 10:42pm
Kama is always comes back to you.  Keep on writing

Re. Lurkers, conversationalists, lovers and who really gives a fuck be
PoetSpeak
- Edited 8th Nov 2021 10:51am
8th Nov 2021 10:50am
I too limit meat consumption
I love it but it's so rare that I indulge
I fear it wrecks havoc on a man's prostate being of the age to be concerned
I'll eat a Bison burger once in awhile
Maybe some pulled pork in-between pulling my pork but pulling my pork is more frequent

You're not simple at all but fucking great to read about your complexities.....

Re. Lurkers, conversationalists, lovers and who really gives a fuck be
DanielChristensen (The Fire Elemental)
9th Nov 2021 10:34pm
You focus your power with laser precision. You command the page with raw revelation, delivered with control.