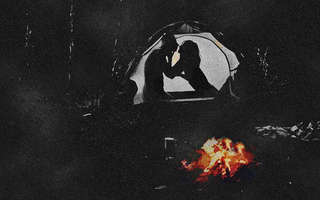 We were childhood acquaintances surprised to find ourselves reunited on a camping trip with friends. Her name was Cynthia, the baby sister, petite and sweet. Her brothers and I had a meal together at her house, and I remember laughing as she pranced through the kitchen, sampling the soup and returning the spoon to the pot. Her skin was dark, and her frame was thin. Twelve years and one short marriage later, I couldn’t help noticing in the firelight that her frame was curvier now, though still slender.

Stories drifted into the night until only Cynthia and I remained by fading coals. A shooting star lit the sky, and I saw it reflected in her eyes. She whispered, “So beautiful, this night.” Our flesh and bone ignited in a flash that matched the suddenness of that burning star. There was heat enough to warm us under an October sky heavy with snow, but our fires did not consume us.

In the dim light in the tent, I saw her face red with the glow of our burning, but her dancing would not be stilled. God, how we danced! We were smitten by nostalgia as our minds whirled around what was and what had become.

Crisp iciness began to sprinkle over our tent as our flesh folded into flesh and heat into heat. Under a down quilt we embraced with locked lips and I thought of Cynthia sipping soup in her mother's kitchen. I felt a dizzy love for the whole of her life.

Written by LostViking (Lost Viking)
Published 17th Oct 2021
Like This?
Poems by Author
Author's Note
Short story of the unlikely reuniting with a childhood friend.
Comment
#childhood #friendship #love
All writing remains the property of the author. Don't use it for any purpose without their permission.
likes 3   reading list entries 1
comments 2   reads 89

Re. Smitten by Nostalgia (Childhood Friends)
TheOralizer
17th Oct 2021 9:04pm
Loved this, thanks for drawing me into the magic. Hugs, O