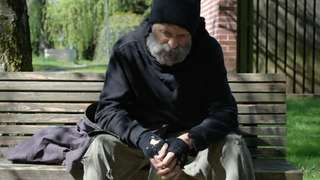 
Doused in cheap wine
and dumpster dives for days:

A bag of weed

Written by Cipher_O (Zero_Stillness)
Published 14th Oct 2021
Like This?
Poems by Author
Comment
#shadows
All writing remains the property of the author. Don't use it for any purpose without their permission.
likes 5   reading list entries 2
comments 11   reads 54

Commenting Preference:
The author encourages honest critique.
Re. Nowhere Man
crimsin (Unveiling)
14th Oct 2021 4:14pm
hello dearest Cipher this makes me think of a man in starbucks once
I was sitting waiting for my coffee feeling a little madness myself
when a man walked in fists clenched at his side I could tell by his eyes he was our of it and ready to blow
I actually felt fear all of a sudden as he took me in...

my heart goes out to them that's beautiful what you did
I don't pray they get off the streets per say but that they get what they need
the sun turned up for warmth, food and the drugs they need...

some people are so checked out they can't live in a house
it's too confining for their spirits...

You become more and more fascinating.

You are absolutely correct, they are well
beyond the confines of modernity.

I have lived with homeless people in my
home state of Michigan as well as in Florida.

this may sound strange, but I did it for my own reasons.

I just feel a kinship with them.

I remember the first time I got drunk, was on Thunderbird Wine, with a homeless individual, in a dark alleyway....

We drank and smoked refer and had a very interesting conversation.

They have a lot of wisdom and I enjoy talking to them.

My uncle and father were very much the sorts
to have gatherings with heaps of sustenance
and music and invite the homeless community...

They had long strange trips...

They rode the rails all the way to the
extraterrestrial West Coast, where they
ate rats in alleys...

Read poems by Cipher_O
Re: Re. Nowhere Man
crimsin (Unveiling)
17th Oct 2021 7:09pm
thank you dearest Cipher you are amazing too we have something in common I too got drunk on thunderbird when I was fifteen I cherish you💗

Read poems by Cipher_O
Re. Nowhere Man
Adelphina
15th Oct 2021 1:04am
This tugs at my heartstrings. I always wonder what happened. That was someone's
daughter or son at one time. How did it go so wrong? Mental illness, drug addiction, orphaned.
So many Nowhere People trying to get by or lost to the streets.

Great one!
Heartbreaking at the same time.

You have a very wise and benevolent perspective.

May beauty be all around you always in all ways.

I feel fortunate to not be there and hope to never end up in that situation.

I deeply appreciate your perspective.

May beauty be all around you always in all ways.

You are a wonderful human being.

I believe in my city, homelessness is at an all time high, in large part, because of rent increases, and evictions that started taking place (after the moratorium ended) when a lot of people couldn't pay rent due to different reasons related to the pandemic. Now, there's an absolute influx. Those who are also needing resources to basically survive, in addition to the homeless population that already existed.  Long standing existing homeless folks (lifers) , that are largely people with extensive mental health issues and that have been long established homeless faces in the community because of that, sadly. Where, even with help, time and time again, they've choose to return to the streets to live. They need assistance, of course (which I am so ok with) however, the amount of TOTAL people needing assistance is astronomical, now. There's as sense of futility because of the sheer numbers....

I have a friend who manages one of the biggest 'soup kitchens' in a historical downtown area of Tampa, he says that the demand for food in their twice daily attempts at feeding people, is off the charts. People start lining up for food at 2am or earlier for breakfast and even earlier for lunch.... and that they run out of food, EVERY SINGLE day. It's fucking heartbreaking. I used to have a job that required me to travel around the downtown area pretty much all day, every day I worked and I would get panhandled at a lot of the most popular intersections for panhandling (it's legal in my city). So much so, I started keeping extra bottles of water and healthy snacks in my little cooler, like apples and bananas, granola, etc..as well as some generic version of Wet Ones wipes that I would buy at the dollar store.. So when/if I was asked if I had money, I could offer them food and water, instead. They ALWAYS took me up on the offer. Always. I started to get noticed because of it and eventually they ended up looking for my car at the red lights, to see if there was anything offered that day. Yes, it was probably a bit dangerous but it was the middle of day, at red lights. I had pepper spray and these people were of need not of malice. To me, it's the little things that sometimes make a tiny bit of difference, even if you're used to walking by and ignoring. Perhaps offering some gum or a cigarette (when I used to smoke, years ago)...or yes, just eye contact. Letting someone recognize humanity, in another person can mean the world.... After all they're just flawed human beings (like us all) under that first glance impression... I think that gets lost, sometimes.

Thank you so much for sharing this with me.

This really makes me think...

(like tiny houses and building up and a few other things...)

I do realize that only certain individuals,
molded by the elements, will be able to enter
structures of any kind...

You always stimulate my heart/mind/soul on a most profound level.

Thank you my friend.