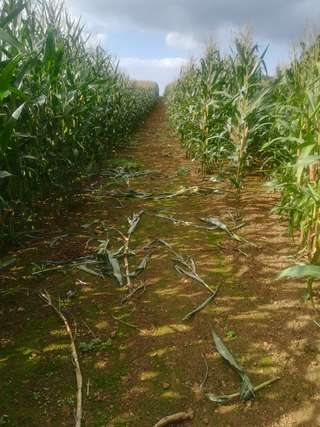 To The Corn Wraith's Lair

There's a path, that's forever carved, through the unyielding corn
Offering a way, of dead ahead, along which I'm inexorably drawn
Through the undulating crop it leads me astray, of that I'm aware
Hewn by those of the passed, like a track to the corn wraith's lair
Every advancing step that I take, is seemingly, on sun baked soil
Crumbling underfoot, like the very earth itself is implicitly disloyal
Onwards and upwards, or down, always below a raven on a wire
Relentlessly myopic I reach the same nadir, then forty feet higher
Nothing but the corn appears real, not even my presence of mind
With a sense that I am following, but they're following and behind
Rationality's my delusion, or maybe my sanity has been repealed
As I can't remember where I'm going, or a time I entered the field
I don't know what I was, I don't even know if I was a sentient man
Tilling this sour soil, up to the dusk, or just when mourning began
Humanity, I sense, still lingers though, but as baneful as a drowth
Someone (I knew?), cut off my eyelids and stitched up my mouth
Lucidity excludes me, but now I'm accompanied through the crop
As an otherworld whispering wind, sighs, like a sickles bloody lop
I'm sure I'm close now, I think, but all my thoughts are non-verbal
Raven eyes are biding my time though, for it's a loop, not a circle

Written by Xaphan
Published 7th Oct 2021
Like This?
Poems by Author
Comment
#countryside #death #FeelingLost #ghosts #nature
All writing remains the property of the author. Don't use it for any purpose without their permission.
likes 0   reading list entries 0
comments 0   reads 57
Commenting Preference:
The author has chosen not to accept comments.