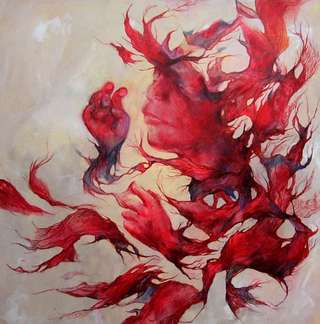 A toll of bells rung, as I whispered a new line to a soon play script. I masturbated with my thoughts. As my phallus prowess balked with its temper of heat, my eyes rolled back.

Often titillated in fields of dreams while inhaling the opium that I'm so fond of, with arousing sexual amnesia spinning in my head.

A thespian and scholar of the intelligentsia and considered a dandy among my peers, following in the footsteps of playwrights before me. I was also a social chameleon and could blend in among the citizenry, taking on many personalities.

A bastard's child, conceived by a scullery witch who paid me little of her attention. I became adept at picking pockets as my father taught me the trade. Being small in stature

I swept the chimneys as a young rapscallion. Often as not absconding with the domicile's sterling ware to pawn.

Becoming arrogant by nature, I picked fights, and on occasions, I whored myself out as a young male harlot. I picked a fine time to play it by ear as the pimps tried to have it both ways

Written by adagio
Published 28th Sep 2021
Like This?
Poems by Author
Comment
#dark #gothic
All writing remains the property of the author. Don't use it for any purpose without their permission.
likes 4   reading list entries 2
comments 6   reads 401

Commenting Preference:
The author is looking for friendly feedback.
Re. Nomads Of Doom
CasketSharpe
28th Sep 2021 10:21pm
A very captivating read. Keep it going and keep it flowing.

Read poems by adagio
Re. Nomads Of Doom
goldenmyst
28th Sep 2021 10:39pm
adagio, this doesn't miss a beat. You kept the powerful prose in fine form all the way to that grand ending. Your talent glows through this resplendently dark but magically raw confessional. Truly I haven't come across any stories as resounding in their energy and great in scope as yours. You use just the right amount of graphic content to make for a heady read but not overwhelming to the reader. A winner all the way through.

Read poems by adagio
Re. Nomads Of Doom
Shinobi (Randall Reedy)
30th Oct 2021 00:33am
This really is very impressive, its has a inspired darkness then captures the essence of nature and has such shadow of Poe, through your words...Masque of The Red Death comes to mind...perhaps due to the language you used here...really and excellent sense of gothic darkness