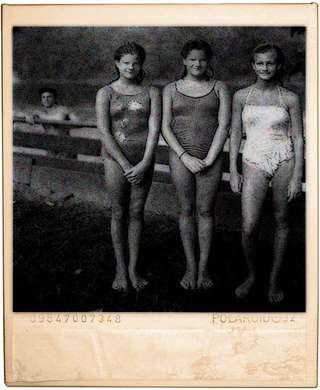 The cardboard cigar box smelled of attic dust. I opened it with reverence.

My father, now dead, seemed frozen in time to me as an older man, but the Polaroid image in my hand showed him at sixteen, staring at a sender girl in a white bathing suit.

Was this my father, his eyes filled with such grown-up desire?
Her face seemed innocent but determined, and I thought, beautiful.

On the back of the Polaroid, he’d inked, “Susan 1980.”
I held the thick edge and looked at their faces, frozen in time.
How long must life have looked to them as they enjoyed that day at the lake?

I remembered a recent conversation with my father and knew that Susan had been his first love. He didn’t say her name but spoke of her with sadness that revealed the depth of their relationship. He sighed, “It was too soon for her, and that was long before your mother.”

Holding his Polaroid, I saw visions of Susan and my father making love. There was a tender innocence to the image but also honest rawness.

They were young. Susan was all legs, arms, and a beaming smile. I saw my father's excitement as Susan spread her slender legs and he slowly fell into her sweet, warm center to find his rhythm. She exhaled through pursed lips then breathed in slow pants in unison with the strange heat that slid in and out.

Her small breasts were beaded with sweat, and clear eyes sparkled with tears as she held herself open to desires she didn’t understand. Her long arms wrapped around my father with fingers grasping onto his arching back as if she were falling below him.

They would each have other loves, spouses, and children, but at that moment, they were all of creation to each other, and that’s exactly as it should have been.
Even with fearful eyes, it was beautiful.

Re: Re. Frozen in Time: Faded Polaroid
LostViking (Lost Viking)
22nd Sep 2021 10:38pm
Thank you for the kind comment. I appreciate this safe place to experiment with topics and approaches.