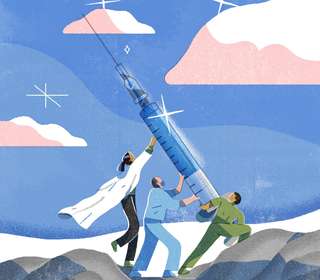 It's never too late to do the right thing.

throw that proud boys membership away
burn that Trump flag
the election ended back in January anyway
QAnon is probably a russian agent
who's never been right
just as clueless as the My. Pillow guy
can't you see?
this is some kool-aid drinking cult shit
and kanye's new album sucks big
so let's just move on from all this silliness
go down to your local drug store
get your vaccination
it really isn't that bad, I promise
I was sick for like a day
but it's better than getting covid
I understand, you've been bamboozled
Fox "news" had you drinking bleach
and cow dewormer
your church wasn't much better
told you God would save you
well maybe he sent you an answer
it was a mask and a shot
to save all of humanity
instead you said Jesus take the wheel
that's when the storms came out
as if he was letting out a great big sigh
went along with a roll of the eyes
said your immune system is strong
wonder how many people said that
before they found out they were wrong
famous last words I guess
but hey, nows better than never
you can keep your freedoms
and BBQs too
go ahead and fly that USA flag
just please keep Trump's ugly mug off it
don't you want peace of mind?
not having to worry if it's you
that might put grandpa in the hospital
told me not to guilt trip
not to put you in a "box"
seems that you're more than capable
of putting yourself in a "box"
but if there is one thing you should listen to
it shoud be your own stupidity
because a virus doesn't care for your politics
it's bipartisan in who it infects
not all the lies you tell yourself
will change reality
the sick are over running hospitals
real people are really dying
all because you sat with your arms crossed
saying nope when you should of said yes
like a real piece of garbage

Written by DevilsChild
Published 8th Sep 2021 | Edited 19th Sep 2021
Like This?
Poems by Author
Comment
#frustration #pandemic #politics
All writing remains the property of the author. Don't use it for any purpose without their permission.
likes 5   reading list entries 4
comments 7   reads 109

Commenting Preference:
The author is looking for friendly feedback.
Re. It's never too late to do the right thing.
Bluevelvete
8th Sep 2021 2:41pm
OMFG!
I am dying here!! ... Between laughing my ass off (the my pillow guy... bahahahaha!!!) and actually wanting to shout along while reading: "Oh Hell YEAH!".... This piece IS AHHHMAZING!

Re: Re. It's never too late to do the right thing.
DevilsChild
9th Sep 2021 9:04am
You have such great comments. Makes me a bit envious hehe. I love when I write something that makes me want to keep writing. I had a bunch of lines I took out because I felt it was getting a bit long, but there is just so much ridiculousness that it's easy to write about. At first I wasn't trying to come off so condescending but somewhere along the way I just got more pissed thinking of all those that died and got sick, and just the selfishness.

Always a pleasure to read your comments, friend. Thank you for the read 😁

Read poems by DevilsChild
Re. It's never too late to do the right thing.
badmalthus (Harry Rout)
9th Sep 2021 1:28am
Awesome write my friend.

Read poems by DevilsChild
Re. It's never too late to do the right thing.
PoetSpeak
15th Sep 2021 9:49am
BIG LIKE