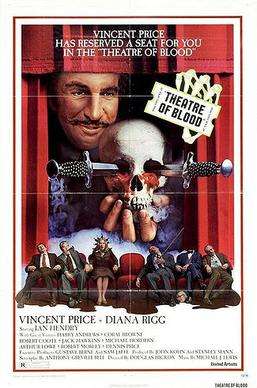 a film review in verse

An Oscar winner starring in
a horror film sounds like a sin.
But great actors have brought to bear
a lot of charm to monsters’ lairs.
It’s just a shame that Vincent Price
wasn’t treated very nice.
He deserved the Oscar more
than many men who’ve swept the board.

It must have seemed a mercy, then,
to let him speak the Bard’s blank ten.
Iambic rhythms pouring from
the gullet of this strutting tom.
A chilling festival of shock
made glory by the son of schlock,
the film stars Price as Lionheart,
a thesp who starts to kill, for art.

Skewered by the critics, he
decides to skewer them, and see
if Shakespeare’s tragedies
can be made flesh in days like these.
The ‘70s, to be precise,
and so the sixty-something Price
kidnaps and cooks Robert Morley’s
beloved pets... dog-and-ale pie, with peas.

Titus Andronicus, that one.
Plus there’s lots of bloody fun
with Troilus and Cressida,
Othello, Julius Caesar,
Henry the VI, Part 1, King Lear,
and Cymbeline. It’s weird
and humorous to see Shakespeare
be wrought in technicolour fear.

Written by The_Silly_Sibyl (Jack Thomas)
Published 31st Aug 2021
Like This?
Poems by Author
Comment
#PopCulture
All writing remains the property of the author. Don't use it for any purpose without their permission.
likes 3   reading list entries 2
comments 7   reads 74

But I tend to avoid watching any movie knowing an innocent fictitious animal was harmed, so I'll take your word(s) for this.

Re: Re. Theatre of Blood
The_Silly_Sibyl (Jack Thomas)
31st Aug 2021 6:09pm
Well, the dogs weren’t hurt in real life, you just see a brief effects shot of what looks like two poodle heads! Thank you for your kind words. x

Re. Theatre of Blood
Mark_Parsons (Mark Parsons)
31st Aug 2021 11:47pm
One of my favorite topics, 70s, low-budget horror, or the 60s.
It's also fascinating when extremely talented, successful actors take on schlocky horror / sci-fi type stuff for a paycheck--shortchanging their talents for a variety of reasons.
Fasicnating.
Was this a hammer film? They made a lot of great atmospheric horror stuff in the 60s and 70s--in particular those by Terrence Fisher.
I like the idea of a "review in verse"--but if I didn't have that, I'd find it just as satisfying.
Good handling of the iambs--you're not too slavish, and that's a good thing.
Nice!

Re: Re. Theatre of Blood
The_Silly_Sibyl (Jack Thomas)
1st Sep 2021 2:50am
Thank you for your kind comment! Theatre of Blood was a United Artists film, though it has that Hammer feel of campy macabre. The whole film is available on YouTube: https://youtu.be/L3GcoNxXaVU It also stars the lovely Diana Rigg.

Read poems by The_Silly_Sibyl
Re. Theatre of Blood
Ahavati
1st Sep 2021 1:04am
Yassssss! What Johnny said about combining favorites! God I loved Vincent Price! He was one of my father's idols and became mine!  His acting was classic to the end! Though his presence was brief in Edward Scissorhands ( his second-to-last movie ), it was still commanding as ever. He was what legends were made of!

Re: Re. Theatre of Blood
The_Silly_Sibyl (Jack Thomas)
1st Sep 2021 2:52am
I adore Vincent Price. If you’re interested, there’s an amusing anecdote about him here: https://youtu.be/sYraFzve0oU