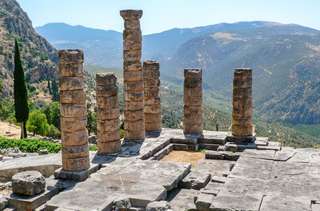 
In ancient Greece there was an oracle,
World famous as the most viable -
Source of information of the inevitable,
For supplicants on the grounds, unstable.

A temple was erected to the god Apollo,
At the location where the processions would go
To consult the High Priestess, Pythia,
Clad in a serpent that today invades Florida.

It was said that she would hiss the words,
In sibilant hexameters that were preserved by scribes,
And later interpreted by the knowing lords,
To open eyed recipients, at the end of long rides.

Some of the questions pertained to brides,
Some were in regard to a potential journey,
Some perhaps could not easily be described.
All were deeply personal and equally worthy.

Is that the questions/answers came in the form of poetry.

Written by Cipher_O (Zero_Stillness)
Published 9th Jul 2021
Like This?
Poems by Author
Author's Note
Exploring the connection between poetry and the Oracle at Delphi.
Comment
#magic #mythology #pagan #philosophical #tradition
All writing remains the property of the author. Don't use it for any purpose without their permission.
likes 6   reading list entries 5
comments 8   reads 98

It occurs to me to go on a poetic exploration of the "mystery schools" of different cultures and time periods.

Read poems by Cipher_O
Re. Python Coding
Numer90 (Numer0-un0)
9th Jul 2021 5:51pm
A temple was erected to the god Apollo,
At the location where the processions would go
To consult the High Priestess, Pythia,
Clad in a serpent that today invades Florida.

Some of my favorite lines in this epic musing..

Re: Re. Python Coding
Cipher_O (Zero_Stillness)
10th Jul 2021 12:21pm
Thank you Numen.  I feel that the stanza, which you cite, buttressed the entire write.  It was tricky for me and the choice was made.  I greatly appreciate your keen eye.

Read poems by Cipher_O
Re. Python Coding
crimsin (Unveiling)
9th Jul 2021 5:58pm
I enjoy this very much dearest poet
I've longed believed poetry a secret language only gifted to some
even in music I find myself trying to crack the codes or hidden meanings
in any case this is what your writing made me think of...

Re: Re. Python Coding
Cipher_O (Zero_Stillness)
10th Jul 2021 12:24pm
Thank you for this comment, Crimsin; it is incredibly thought provoking.

Read poems by Cipher_O
Re. Python Coding
Ahavati
9th Jul 2021 7:56pm
Oh bravo! Very much enjoyed the form and rhyme; but, mostly the mysticism and mythical quality of this write.  That ending is fabulous and so apropo!