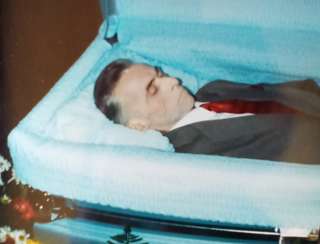 I had an uncle. His name was Norman Greene. He died twenty years ago today on June 12, 2001. He was fifty-six. Norman smoked three or four packs of cigarettes each day. He died of lung cancer. A doctor misdiagnosed Norman. He told Mom that Norman had TB. A few days later, we were informed about the misdiagnosis, and that Norman actually had lung cancer. Norman died about two weeks later.

Norman was very smart. He was a whiz at algebra. But when he needed to exercise his intelligence the most, he failed. Before Norman had to stop working, his employer told him that he had a mental problem and needed to get some help. Norman ignored his employer. A short time later, Norman had a breakdown and had to be sent to an insane asylum.

By the year 1982, he had been sent to that asylum three times. Because he would stop taking his medications and have breakdowns, his Schizophrenia worsened over the years. Some people tried to do him a favor but he screwed it up. They started sending a nurse to his house once a week to give him his medication by giving him a shot. One day Norman didn't like being pricked by the needle so he punched the nurse. This ended the nurse's visits.

When he assaulted the nurse, they wanted to send him back to the asylum immediately, but Norman had a friend who talked them out of doing that at that time. But it wasn't long before Norman was put in another mental institution. When he was released this time, he wasn't allowed to return to his house like usual. They placed him in a home. Because he was unwilling to take his medication and became violent at times, they forced him to be sent to that home. Norman died two or three years later.

When I was in my mid twenties, I knew that I was walking down the same path as Norman. I knew that if I didn't get some help, I would have the same future that Norman had. I got the help that I needed. I've been on medication for about a quarter of a century. Because I take my medication, I've never been committed to an asylum.

If you are Schizophrenic or have another severe mental disorder, you must take medication. Many Schizophrenics won't take their medications because they believe the medication is poison. It's not poison. It's salvation. Medication won't cure you but it will prevent your condition from becoming worse. It will also prevent you from having to be sent to insane asylums. But if you choose to be stubborn like Norman and not take your medication, you will be sent to asylums and maybe even eventually be sent to a home against your will. But there is a way to stop that from happening. Take your medication.

Written by randyjohnson
Published 12th Jun 2021 | Edited 15th Jun 2021
Like This?
Poems by Author
Author's Note
Dedicated to Norman Greene (1945-2001) who died on June 12, 2001
Comment
#cancer #death #MentalHealth #nonfiction
All writing remains the property of the author. Don't use it for any purpose without their permission.
likes 0   reading list entries 0
comments 0   reads 32
Commenting Preference:
The author is looking for friendly feedback.