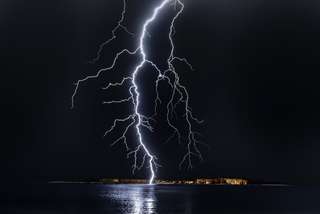 A man was too drunk to give his son a ride.
Lightning struck his only son and he died.
He drank too much and his son had to walk to his friend's house.
When he had to bury the son who he lost, he also lost his spouse.
His wife was working at the time and she packed her bags and walked out the door.
She blamed her husband for their son's death and she didn't want to be married to him anymore.
After his wife left him, he was so heart broken that he committed suicide.
He was heart broken because he lost his wife and because his son died.
If he hadn't drank himself into a stupor, his son would still be alive.
After losing his family, he decided that he didn't deserve to survive.
This unfortunate man ended his own life with his gun.
He lost everything when a lightning bolt killed his son.

Written by randyjohnson
Published 5th May 2021
Like This?
Poems by Author
Author's Note
I was inspired to write this poem this morning when it came a thunderstorm
Comment
#dark #death #fiction #son #storm
All writing remains the property of the author. Don't use it for any purpose without their permission.
likes 0   reading list entries 0
comments 0   reads 51
Commenting Preference:
The author is looking for friendly feedback.