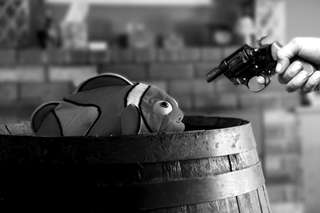 Shooting Fish in a Barrel

BANG! His drunken form swallowed the bedroom. She slunk deep into nest of pillows and duvet. Nightly ritual began. She recoiled at each approaching footstep. He stealthily reached for the gun. He enjoyed her screams and pleas as he pulled trigger. Volley of blanks broke the silence.

BANG! Nerves frayed, she ate another Valium breakfast. In a cloudy haze she decided. She would swap the blanks for real bullets.

BANG! Sat at the bar, complaining vehemently that the beer was too warm, his mind cranked through devious levers. ‘Oh yes,’ he roared deep inside. ‘Tonight I will pretend to shoot myself'.’

Re: Re. Shooting Fish in a Barrel
Strangeways_Rob
23rd Apr 2021 1:44pm
Life often is harsh. Domestic violence / abuse is not pretty. In hindsight, should have had the man shoot himself.

Re: Re. Shooting Fish in a Barrel
Strangeways_Rob
23rd Apr 2021 3:39pm
Agreed. I have changed the ending. It is as rare as rocking horse shit for me to re-edit any of my scribbles, but it was an over sight on my part after some thought. Thanks. Rob

Read poems by Strangeways_Rob
Re. Shooting Fish in a Barrel
summultima (uma)
23rd Apr 2021 4:12pm
fresh new change in here in du fr you..with your fav fiction genre you posting doo.. this one is roaring raw  & pitch dark in its shocking telling... & you wrapping up in all such few worded punches.. you need to post more prosaic or blended poetryprosaic or such short quik fictions. light love ev doo xx:)

Re. Shooting Fish in a Barrel
markarrow
24th Apr 2021 7:42pm
Routines are so important