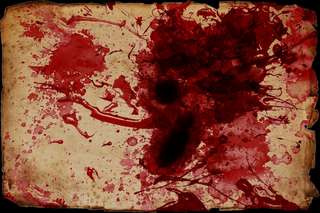 Broken mirrors lie in shattered shards, scattered on a sodden floor
Lethal splinters beneath a splattered ceiling, in the blood and gore
Offal spills from butchered guts and sightless eyes no longer weep
On a pale face there're clotty pools, as brains from a fracture seep
Death remembers naught of pain and fear, or a wielding of an axe
And the gratuitous violence of a madman's, unappeasable attacks
Now that we have lost our minds, now is my time to write a wrong
Despair likes to share, but only silence trips from a bloated tongue
God wasn't by your side tonight (or ever) but the devil lurks within
Odious evil presence, stole my razor blade to strip away your skin
Revulsion's my compulsion, but the matter that's you is inside out
Even so though, I see in your lifeless eyes a shadow cast of doubt

Written by Xaphan
Published 12th Apr 2021
Like This?
Poems by Author
Comment
#dark #death #violence
All writing remains the property of the author. Don't use it for any purpose without their permission.
likes 0   reading list entries 0
comments 0   reads 65
Commenting Preference:
The author has chosen not to accept comments.