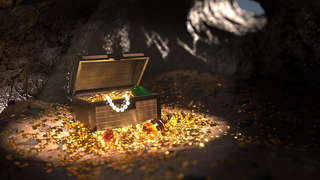 I recall it was in a far away port, so many years ago,
When the hour was past midnight in the tavern’s hall.
An old pirate with a wooden leg and a heart of woe,
He told us of a treasure, and how it had cost him all!
Accursed by the ancients, not known by men today,
There was a chest filled with jewels buried on an isle.
No more would the old man search for another day,
So it fell to us to make his knowledge so worthwhile.

The crew expected an easy voyage, and easier loot,
But the skies grew dark and the waves treacherous!
Some miracle or curse spared us Neptune’s boot…
But the skies stayed dark and the winds thunderous.
At last the isle of the old man’s tale began to appear,
So I ordered the men to make ready for its’ shore…
But every lad of our bold crew was petrified by fear!
Reminding them of treasure rallied them, once more.

We rowed ashore, eight men and I, seeking a chest,
Accursed by the ancients: and waiting for our hands.
We swore until we found it, that we would not rest!
And so, we searched that isle’s darkly barren lands.
The chest was in some ruins, of what none may tell,
Inside were rubies and emeralds, and sapphires too.
But four who touched them died and went to Hell…
Leaving four men and I the treasure’s curse to undo!

No one dared to lay hands upon the sparkling gems,
We carried the chest back to the ship, locked tightly.
But, on our return voyage, greed overtook the men!
They demanded their share of the loot, and violently.
The four and I stood firm and warned them together,
But no one believed us and we could not stop a one.
They opened the chest, as terrible grew the weather,
And every sailor who touched a bauble was undone.

Four men and I pulled in to port, our voyage ending.
Some fools bought our treasure for twice its’ worth!
They are likely all dead now, to the curse a-bending,
Whilst we drink to their sorrows: by a tavern hearth.
Rum for every lad, and gold in our pockets to spare,
We’ll hire a new crew and set sail for further glories!
Of legends and curses a pirate cannot always care…
Though it is the stuff of such, that makes fine stories.

Written by Kou_Indigo (Kara Lucielle Pythiana)
Published 6th Apr 2021
Like This?
Poems by Author
Comment
#curse #dark #death #fate #sea
All writing remains the property of the author. Don't use it for any purpose without their permission.
likes 0   reading list entries 0
comments 0   reads 96
Commenting Preference:
The author encourages honest critique.