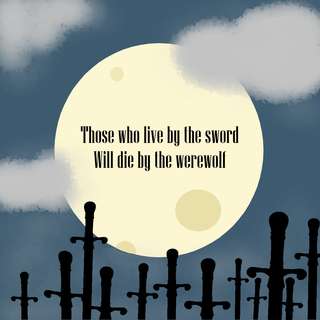 The Sword and the Werewolf

Back in my day kid, yeah back in my day things were DIFFERENT. They were BETTER. Werewolves were feared and snails forgotten and trampled after a solid full moon and a rain. You see it always rained on the full moon. They used to say that the moon was God’s eye and once a month he needed a good cry. So all he had to do was open one eye and look at us and he would openly weep. He couldn’t open both eyes. That shit would kill him. That much pain. He would off himself that night.

So what did God do? He gave us werewolves and called it a night and now they haunt this village every full moon. It comes and goes and some people come and go and some people’s dogs come and go. Beware the full moon. It’s coming. God is watching. But they lie to you, see. They tell you he’s always watching. He isn’t. It’s a goddamn lie. It’s a fucking outright myth. They get away with it these priests and tabernacles. Building monuments to their falsehoods. It isn’t about God, my friend.

Nope, if it ever was I wasn’t here for it, I’ll tell you that much. Nope, never seen a monk I’d trust. Give ‘em to the werewolves I say. I think that’s why God gave us the werewolves. He was trying a new purge. Something a little creative this time. Not just a big ass flood. Woosh and it’s all gone, a clean slate, nice and fresh. Fresh and clean.

But no, there’s nothing clean left in this world. Everything has a thin layer of filth all over it. It’s there. You can’t see it. You can only feel it. It’s accentuated when two people touch. You touch and you can feel this layer in between you. This dirt. Uncleanliness. It’s the tie that binds. For better or for worse. We’re married to it.

No, there’s no divorce lawyer in the land that can get you out of this one, kiddo. Nope, not a single fuckin’ one. Well yes, of course. You can follow Henry VIII. Of course. I never said you couldn’t. But beware. Beware.

Those who live by the sword will die by the werewolf.

God isn’t always watching but he’ll see eventually won’t he? And then? Maybe if you’re lucky you’ll just transform yourself. That would be an act of mercy, of grace, of LOVE. You believe me, don’t you?

You ought to. That is the only thing you can truly hope to achieve. It’s the pinnacle here in this town. A lycanthrope of love.

Yeah, it has a nice ring to it, but go and tell me if it still does after the next full moon. There’s no transformation without pain. There is no ascension without agony. When you fly higher you’re forced to look down.

And you know what? When you’re up there looking down you’re gonna cry too.

Maybe one day there will be enough tears raining down to wash us clean. But I doubt it. No, I’ve resigned myself to the dirt of the earth. I’m not looking to fly up. I’m digging down. Icarus flies and I dig. I'm happy down here with the snails.

Well, of course, not everyone lives through it. It isn’t like that. There are always casualties. This is a war. This is a war between us and the werewolves. You pick your side and you do what you can. One way or the other though, there’s a war out there. You don’t always see it but every day another death brings us nowhere closer to the end. There is no permanent end. Only your own.

The world turns on. God will keep weeping for his creations. So you transform as much as you can in your own lifetime. And you weep too. Weep for the past. Weep for the present. Weep for the future. Because you see back in my day, friend, there were CHANGES. And there are in your day too. And when everything changes and you look down on those below and all you can do is weep you’ll remember:

You can’t save them all.

Written by pizzapocketeer
Published 31st Mar 2021
Like This?
Poems by Author
Author's Note
Live by the sword, die by the werewolf.
Comment
#prose #werewolves
All writing remains the property of the author. Don't use it for any purpose without their permission.
likes 0   reading list entries 0
comments 1   reads 28
Commenting Preference:
The author encourages honest critique.
Re. The Sword and the Werewolf
dizzzzzzy (Nunaya)
31st Mar 2021 6:07am
Yet they never say for what reason.