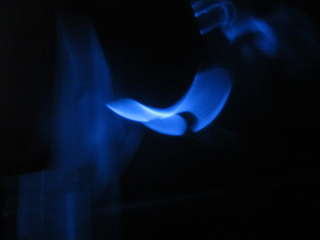 At The Mall With Blind Joe Death and dada

A nearly non-descript fellow in a gray flannel suit is on the down steps of the
blessed escalator in a mall near you.

The only odd thing about him his head, which is wrapped in dirty, stained white linen. Meet Blind Joe Death.

He's followed by another fellow even more non-descript  than he, so why
bother to attempt to describe him. suffice to say he's in "human" in
form, as is the other guy.

The first "other guy" likes his name of "Blind joe
Death". Everybody thinks they "know" him, And  that's okay withol' B.J.

The "other other guy", sometimes responds to the word, "dada", when the sotten ash falls out of his head."

They're in a be'damned shopping mall, just they two.  They're looking for a Satchel Paige t'shirt, of all things.

The first other guy says "Fuck this. There aren't any Satchel shirts in this   goddamn hell-hole".

To the exit they go followed by no one.  Just they two.

As they get outside, BJ sniffs and says, "damn, who burned the pizza?"

And as far as thee eye can see, 'naught but smouldering ash, gray haze, and little flickers of flame.

"Wow. Looks like someone had one hell-of-a  fire-sale out here, Shit." Says BJ.   Dada nods affirmatively.

BJ says: "Well, look here. Somebody swept a path  through the ash just for us",  (of
course).

Dada tries  to nod, but instead coughs a horrendous cough that billowed black soot all'round, enclosing both of them, (and the some).

"Might as we get our asses movin'.  Who knows where we'll be at sundown......providing there's any sun to be goin'down,at all  Phew!."

dada just got up, stifling several coughs, and followed BJ along the ashen road to who-knows-where.

Written by dkzksaxxas_DanielX (DadaDoggyDannyKozakSaxfn)
Published 16th Feb 2021
Like This?
Poems by Author
Author's Note
I didn't intend for this to be similar to "Waiting For Godot".......but it is, ain't it? I don't think it's plagerous in any way. I guess i've read and seen that gem too many times.
La-dee-dah.
Comment
#dialogue #dystopian #fate #ghosts #manipulation
All writing remains the property of the author. Don't use it for any purpose without their permission.
likes 2   reading list entries 1
comments 1   reads 228

Commenting Preference:
The author encourages honest critique.
Re. At The Mall With Blind Joe Death and dada
JohnnyBlaze
16th Feb 2021 9:05pm
I was compelled by this compelling story to come pelling to you that if "Meet Joe Black" and "A Christmas Carol" were mashed together, I imagine it would be similar to this.