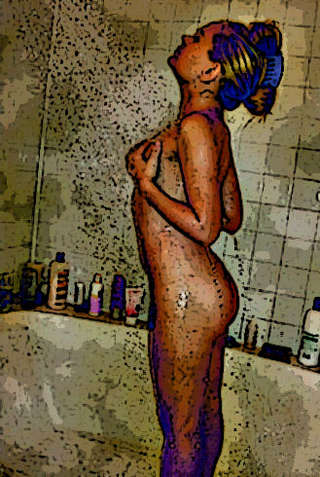 To some, Iím a monster; A well-adjusted, financially independent monster, but a monster non-the-less.

All the world was a buffet spread with fleshly delights and I had just enjoyed some forbidden fruit in the preacherís wife. I worked hard for that one and felt certain that Iíd placed that nasty preacherís family on the path of destruction.

Rather than bask in the euphoria of my victory, I decided on finger food. Nothing like an easy access snack to satisfy the monster inside.

When I entered the place, stale smoke bathed over me with the smell of sin. I liked it. The music was loud, and the room was dark except for the stage where a couple of beautiful human forms danced and humped against imaginary partners.

There was a desperation and delight in these girls. They were in their prime, which was the delight part. They smiled and laughed as if there were no tomorrow. Yet, they seemed desperate to squeeze all of the monetary value from their young bodies before the great decline began. With their lifestyle, the decline was sure to begin sooner than in most.

My lusting eyes landed on a petite blonde, probably bleached blonde. She had a beautiful smile and some sparkle in her blue eyes. Her mammary glands and accompanying flesh were little works of art. She had bikini tan lines which I found appealing because it meant she had some interest in recreation and taking care of herself. Yes sir, Iíll have a plate to go.

I marched right up and slid a bill across the floor at her feet. She smiled and mouthed, ďthank you.Ē Then, I settled in until her two or three dances ended, knowing sheíd drop by.

There were other girls, all beautiful in their way, but little sparky was my selection. When she finally finished, she quickly appeared at my table.

ďHi, Iím Candy. How about ordering this tired girl a drink,Ē she said in a southern chirpy voice. I couldnít assess that voice from her performance but it wasnít a deal-breaker.

ďWell now, I like a man who says what he means,Ē she said and then signaled a scantily clad waitress, obviously at another stage in her declining career.

Once her drink arrived, she sipped the straw with childish satisfaction and I saw the drink level visibly drop. ďWhat did you have in mind, maybe a visit to the VIP?Ē

I slid five crisp bills across the table to the edge of her fingers, moist from condensation of her icy drink. ďI was thinking maybe your shift would end a little early this evening.Ē

She smiled, ďI like that idea, but youíll have to pony up a little extra time for travel.Ē

I didnít like negotiating, but this little human before me had the flesh I wanted, and so I slid across three more bills so she wouldnít have any more questions. ďIím in the motel next door, so your travel time wonít be much, and I promise to be a gentleman,Ē trying to imagine how she would define ďgentleman.Ē ďIíll have a little something extra for you when you arrive.Ē

ďI like that idea,Ē she said as I slid her my room key, complete with my room my cell phone number.

ďI like an organized man, too,Ē she said with a laugh. I should be leaving here after the next dance, say 9? May I use your shower?Ē

ďYes, you mayĒ I said with a wink. I might need a little road dust scrubbed off from todayís drive.Ē

At 9:00 sharp there was a hard knock on the door. Through the peep-hole I could see her glancing around wearing a manís baggy plaid shirt.

When she came in, she gave me a little hug, and she headed for the bathroom with a small suitcase. She stopped short. ďMy real name is Brianna. Mom used to say it meant noble, but Iím more of a Candy now. Ē

ďIím pleased to meet you, Breanna. Iím Markus. May I join you?Ē

ďIíll let you get started and call out when youíre ready.Ē

ďThanks. I would like to be nice and clean for you,Ē she said in a still-chirpy tone. ďNothing like a bunch of random men ogling over you to make you feel dirty.Ē

ďNo, there was nothing random about you. Tonight was meant to be. You were a godsend because I needed exactly what you gave me for my apartment rent.Ē

Iíd never thought about the economic benefits of ordering some finger food. That this pretty human could pay her rent for the next month made me feel good. I wondered how many men sheís been with. This wasnít a repulsive thought but actually excited me. Remember, Iím a monster at the core.

A high-pitch ďOKĒ echoed from the slate floor bathroom past the clear glass door. When I entered, she faced the showerhead straight on and steam drifted through the air, fogging the glass door.

Iíd left my clothes on the dresser and opened the shower door. She turned and smiled, wrapping her arms around me and pulling me close. Her breasts rested warm and wet against my stomach.

She said, ďI just love the feeling of water running over me.Ē

ďIt looks good on you.Ē She laughed and leaned her head into my chest. It surprised me because if felt authentically affectionate and this was, after all, a business relationship.

Her little frame twisted slightly so her breasts slid across me in the water. I leaned down to kiss them as my hands ventured to her lower ass, feeling her youthful and toned muscles. My fingers went around back low sliding across gentle curves to her freshly cleaned anus. I pressed lightly and felt an earthy dirtiness thinking of others who must have been there during her prime years. She hummed approval as my fingers smoothed up and down her crack softly.

I felt her body lowering and knew what was next. I looked down to see her sparkly blue eyes staring at my raised cock as shower water flowed over it. She took the bar of soap sheíd been using and began rubbing me. I looked carefully at her thin wet fingers moving over my shiny crown and thought of it inside the preacherís wife just two afternoons before. I wondered where Bethanyís life would lead and thought of the weeks I worked before we became, as she would say, ďone flesh.Ē She was a forbidden dish. This little human before me now was fresh finger food. The words, ďto everything there is a seasonĒ flashed through my mind as Breanna wrapped her lips around me.

She was pretty even without makeup now. Her blonde hair looked darker wet, and I thought the little tan lines on her shoulders were beautiful as her head moved mechanically into and away from my body. When her head moved away, I could see my cock glistening, large and firm. Iíd been blessed by genetics and felt gratitude for the pleasures provided by this tool, a lucky gift from birth. Breanna seemed to appreciate its size and occasionally caught her breath before taking long licks up my shaft and then leaning back to admire it.

ďThatís one good looking cock right there, mister,Ē she said with a country twang over the hiss of the shower.

ďWhy, thank you madam. It was a gift from my parents.Ē She laughed and licked me around the crown before slipping back in.

After drying off, we both fell across the bed naked and then embraced. I didnít expect the kissing and cuddling she gave, but it was welcome.

ďAre you ready,Ē she asked reaching for a condom on the bed stand.

She pressed the sheath over my towering cock, and then gave me a few strokes with her hand. Then she threw one leg over me, moaning as she she centered on me.

Breanna turned into a little machine, firing fast and strong. She hunched down low to me, and so her breasts touched my chest as puffs of air hit my ear inches from her lips. Her lower body bounced like a crankshaft cylinder firing steady, and I was the piston sparking inside. I put my hands on her little ass and felt the power, speed, and heat. God, the heat!

This pace went on for several minutes before she rolled aside exhausted. I went to my knees as she went face down and raised her ass toward the ceiling. I slid inside her and began pumping while holding her beauty between my hands, watching the bounce in the small of her back each time I pressed.

I felt engulfed in her heat as an aura of lust formed over us like a bubble removed from reality of our surroundings. Joined physically, we were two separate animals conscious of our past, fearful of unknown futures, and viciously writhing together to meet needs known only to us as individuals.

When she sensed that I might come soon, she spun around and knelt before me. Condom off, she began oral again. After a moment, she pulled off and looked up with moist blue eyes. She said nothing, but her eyes were wide, like small windows to the universe. Ah, the beauty of humanity, even in those deemed common. I pressed my thumbs across her rosy cheeks and around her lips to feel her wetness.

I thought of her internal mix of fluids that brought forth such beauty and the continuous warm thumping in her chest. I thought of her past lovers, her family, and the experiences in life that led here. Was she the person her parents had envisioned her becoming at her birth? Were there disappointments or tragedies?

These were not sentimental or affectionate thoughts, but the thoughts of a man marveling at their complexity, even in a wanton, though beautiful, fellow human being. I felt powerful possessing all of her in that moment. Is not part of our driving lust to possess the story and unknown desires behind the other enjoined human animal?

Breanna licked at my scrotum as I stimulated myself. Then she looked up with the eyes of a small chick with extended tongue in anticipation. I stared at the wet moist pink that had just been licking my shaft moments before. She saw ecstasy in my eyes then took me in. Her lips sealed on my throbbing as she silently swallowed my life into hers. Oh god, to know and be known, even for this imperfect moment!