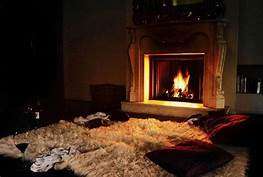 Crackling of The Fireplace part 1 of 2

Crackling of The Fireplace part 1 of 2

Tom had finished making the final preparations to the dinner table. He and Pattie had been seeing quite a lot of each other over the last month, and had been out to dinner several times, but this was the first time that they had dined in his home. Unless you count the few times, they had pizza and watched a movie, but tonight was going to be different. Tonight, marked the anniversary of one month of dating, and he wanted it to be as special as possible.

A warm fire burned in the fireplace, soft music played, the candles were lit, and the dinner was ready, all he needed now was Pattie. Looking anxiously out of the front window, he watched as the snow began to fall harder and Tom worried that she might not make it at all. As the storm grew worse, her car pulled up in the drive and Tom said a quick prayer of thanks that she had made it safely. Tom opened the door quickly to let her in; taking her coat and letting her warm herself by the fire. She handed him a bottle of champagne and bent to kiss her waiting lips.

Well I guess this hardly needs chilling, perhaps I should warm it instead. She giggled at his wonderful sense of humor. Taking the wine back from her he headed for the kitchen saying, "I'll just pop this in the microwave."

When he returned, the bottle was open, and he poured them both a drink. She sipped it, tasting the sweet Champaign as the bubbles tickled her nose. Making himself comfortable on a sofa by the fire, casting a warm smile in her direction before going to collect the meals from the kitchen. Roast Lamb and an assortment of vegetables in a creamy white sauce, seasoned lightly with the slightest hint of fresh herbs. Knowing this was her favorite, and tonight Tom was out to stimulate all of her appetites. His mouth watered as they sat to share the meal. All through dinner he kept her laughing. Looking into her eyes and giving her a cheeky wink that would set her giggling. He loved the way she giggled, and she loved the way he made her do it.

With the meal over, Tom went to collect the deserts from the fridge. Setting the ornate glass bowl in front of her, Tom caught her hand and kissed her fingers.

There is only one desert I really want, but I shall eat this delicious treat first, and then come looking for seconds. His voice was so smooth, so sensual. They had never made love before, not wanting to rush things and spoil the bond that was growing between them, but tonight seemed like the perfect time. With the storm now raging outside, there was no way you will be able to go home, and she had no objection to him staying.

Pouring her another glass of Champaign, he took her hand and led her to the fur rug in front of the fire. They sat together for a moment, simply enjoying the closeness of each other's bodies. Tom took the glass from Pattie's slender hand, setting it to one side with his own. Gently lifting her chin, he gazed lovingly into her eyes, then their lips found each other in a long and tender embrace. Moving his hand over the side of her beautiful face, he slipped his fingers through her hair, releasing the clasp, and letting it tumble down her back in a thick, dark wave. He loved her hair. The feel of it, the smell of it, he often tried to imagine how it would feel, draped across his chest while she slept in his arms. Tonight, he had every intention of finding out.

Slowly he kissed his way down her neck, her head tilting back as she sighed softly, giving him better access to her delicate throat.

Kissing and nibbling, he moved slowly over the exposed flesh that warmed under the touch of his lips, following a hidden trail that would lead him to the inviting valley between her breasts. A gentle hand lifted to fondle her ample breast through her dress, teasing and caressing her erect nipple against the fabric while his taste buds danced across her flesh. The scent of her perfume filled his senses as his tongue sort her generous cleavage.

Reaching behind her, he unfastened her zipper with agonizing slowness, savoring every moment of discovery. He wanted to burn every wonderful moment of this night into his memory, and he would rush nothing. Running the tips of his fingers over her exposed back through the opening of the zipper, he was delighted to feel the goose bumps spread across her body. He could feel them under his lips, and he strives to thrill her further.

Softly kissing her shoulder, he pulled the strap of her dress aside with his teeth, letting it slide down her arm, exposing the side of her well-rounded breast. His mouth watered for a taste, and as his lips ventured down to sample the sweet golden flesh. Tenderly she stopped him. Reaching out, she began to unfasten the buttons on his shirt, kissing each new part of his wonderful hairy chest as it was revealed to her. She paused to tease his nipples with the tip of her tongue, making them hard against her soft lips, and he longed to return the gesture. Sliding his shirt down over his broad shoulders, she ran her fingers through the thick mat of hair that covered his muscular chest. She could feel his heart beating faster beneath her touch, but she wanted to make it beat faster still.

Catching her chin with his finger, he lifted her face to his once more, kissing her soundly before making his way back to that very inviting breast. Ever so gently, he kissed and licked the outer sides, sending goose bumps racing over her body once more. He turned his attention to her other shoulder, sliding the strap free with his teeth once again, setting both of her spectacular breasts free from their containment. He watched as the light from the fire danced across her golden flesh, and he bent to worship them, as they deserved. Caressing them gently with his hands, feeling the weight of them, rubbing his thumbs over the proud and erect nipples. He kissed them all over, taking care not to miss an inch of these beautiful offerings.

With the tip of his outstretched tongue, he began to lick and tease her dark buds, then sucking them into his mouth, biting gently with his teeth and top lip. He would do nothing to damage these breasts that even a goddess would envy. But then this woman was so like a goddess descended from the heavens to be just with him, there would be none to know the difference.

A soft sigh escapes her lips, his tender attentions causing her entire body to hum with soft delight. Laying her back on the rug, she lifts her back and ass so that he can slide her dress down over her hips and along her slender legs, tossing it to one side with his shirt. Gazing down over her body as she lay before him on the rug, she took his breath away. The way the firelight danced across her golden flesh, her hair spread out over the rug behind her head, she was magnificent.

Pattie looked into his face as he gazed upon her, the glow of the fire, the flickering of the candles, he was gorgeous, and he was hers. She yearned to reach for his pants, to set his manhood free for her eyes to devour, but he held her back, his impassioned lips returning to the dark beacons that pointed at him from the center of each breast. Her back arched, her breasts crying out the attention of his hungry mouth, and he would not deny her.

As he feasted back and forward between her nipples, his fingers strayed to her tight stomach, tracing ever decreasing circles around her navel, finding its center then circling out again, his fingers discovering the silky down between her legs and stopping to explore a little further. The tip of his finger found the edge of her slit, and he felt her body responding, needing. Smiling to himself, he took pleasure in teasing her, taking her pleasure higher. Her legs parted a little, inviting him, welcoming him. He accepted her invitation, moving his finger a little lower, exploring her precious treasures.

Pattie moaned softly as his lips parted company with the breasts, making their way down over her belly, kissing and nibbling as he sought to find the places that pleased her most. Boldly his fingers parted the already wet lips of her sweet sensuous pussy, he could smell her odor, her heat, and he wanted, to taste it, drink it, devour it. As he drew closer to her waiting sex, her hips lifted, gyrating and wiggling in heated passion. He loved the way she responded to his touch, his cock throbbing hard in his pants with a need of its own, but it was not time to set that monster free yet.

Written by nutbuster (D C)
Published 3rd Feb 2021
Like This?
Poems by Author
Author's Note
to you my dear friend
Comment
#lover #passion
All writing remains the property of the author. Don't use it for any purpose without their permission.
likes 2   reading list entries 1
comments 6   reads 106

Commenting Preference:
The author is looking for friendly feedback.
Re. Crackling of The Fireplace part 1 of 2
SweetKittyCat5
4th Feb 2021 3:28am
What a beautiful narrative, my friend, I thoroughly enjoyed this gem, the imagery was simply breathless

Re: Re. Crackling of The Fireplace part 1 of 2
nutbuster (D C)
4th Feb 2021 6:32am
as do I love sing up for the COVID shoot today at the VA heath department may be as long as 5weeks before i hear from them

Read poems by nutbuster
Re: Re. Crackling of The Fireplace part 1 of 2
SweetKittyCat5
4th Feb 2021 6:37am
Yes, it is a shortage for people to get their second one, just hand in there and be safe out there

Read poems by nutbuster
Re: Re. Crackling of The Fireplace part 1 of 2
SweetKittyCat5
4th Feb 2021 7:08am
I will private message you okay... and goodnight my friend... 🍷