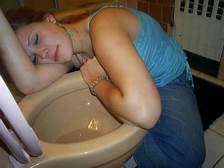 This was not happening. She could not be doing this. No. She was not opening her mouth, not taking a vile waste fluid into it. But she was. He had not told her to do that. They had talked about it, masturbated to it, but it had always been a fantasy, an impossibility. Surely no one could truly be depraved enough to cross this line.

Straining, he stopped the stream. Sue opened her eyes, her mouth still full of piss. She closed her mouth and swallowed. "Why did you stop?"

Phil could not answer. She had swallowed!

Was this really happening? Was he going crazy? Sue was alarmed at the look of terror in Phil's face.

"I pissed in your mouth."

Phil, you have got to be the most fucked-up young man I've ever met. Why do you think I came here? I want to swallow your piss. I want you to treat me like a whore.

No prostitute would agree to this.

You know what I mean! I mean for you to go wild, to let that animal side of you out. Do you have any idea how sexy you are when you do that?

She closed her eyes and breathed deeply, trying to summon patience. I didn't say the safe word because I couldn't handle it. I said it because I'm not sure if you can. What happened to the aggressive, sadistic young man who's brought such joy into my life?

Phil considered this. When fantasy becomes reality, it is never quite the same as the fantasy, is it? The messiness of reality is, well, messy.

"Tell me the truth," said Sue. "Were you or were you not turned on by me drinking your piss?"

Phil's cock spoke for him, jerking forward so hard he had to take a step.

"But..." he asked, in a hesitant voice, "what did it taste like?"
"It's like drinking beer for the first time—"

"The first time you drink beer, you hate it. Some people never get past that — looks like you didn't," said Sue. "But most of us do get used to it. Or wasabi — do you ever eat wasabi? With Japanese food?"

"I stay well away from that."

"You're sensitive. That's okay," said Sue. "But the point is, those of us who do eat it take a while to get used to it. Then we love it."

Phil digested this. She really doesn't mind? She will really drink my urine?

Sue prostrated herself on the floor — a floor soaked in piss. She stretched out her hands to Phil in supplication, her chains clinking. "Won't you please continue, master?" she asked. "I'm so thirsty..." She stretched out that last syllable teasingly, a twinkle in her wet eye.

Suddenly Phil felt like a four-year-old who wets the bed because he's too lazy to get up and head to the bathroom. A lifetime's discipline, a lifetime's worth of injunctions on where and how to piss were falling away. Of course, he should piss in this whore's mouth!

Filled with excitement, he let fly the golden shower again. Sue picked up the dog bowl and held it under her face, catching all the overflow dripping out of her mouth.

Not even the strongest woman can truly swallow a urine stream. It is like drinking from a firehose, albeit a small one. Most of the piss entering Sue's mouth dripped out the sides. But still she swallowed, one gulp after another, more and more of Phil's filth flowing down her throat. The thought of it settling in her stomach made him jump for joy.

"Swallow my piss, you dumb white bitch," Phil said, excitedly. Yet the pejoratives didn't engender contempt in his heart. What he felt was awe, respect, and gratitude for his slave's doings.

At long last, his bladder was empty. Sue's body was completely soaked. Her hair, on head and pubic, was as wet as a bathtub. Spray had soaked the floor and the toilet. The room looked like a golden disaster area. Only the overshoes protected Phil's own body from the contamination.

Sue started to lift the dog bowl to her lips. Phil hadn't told her to do that, but the sight almost instantly brought a different fluid to his cock.

She gingerly took a sip, then, suddenly, a full gulp. She looked straight at him as she swallowed the large mouthful. Despite the filth soaking her, Phil wanted to ram his cock in her mouth, and shoot a load down her throat. She was fully prepared to drink down his piss as if it were beer!

She looked at him questioningly.

"Pour it on the toilet rim. All the way around."

Sue managed to look disappointed as the urine soaked the sides of the toilet, though most of it went into the water designated for such purpose.

"Now let's see how much of a whore you really are. Drink out of the toilet."

"I am sorry, my lord, but I must ask you not to flush the toilet."

It didn't work all that well. New toilets have a water level so low that her tongue barely scraped the surface. Sue made do by sucking it, loudly, like a child playing with a milkshake through a straw. Her ass was so gorgeous. Phil wanted to kick it through his piss-soaked overshoes, but held himself back. She was doing enough for him.
Sue came up, her face dripping. "How will master degrade me now?"

Written by nutbuster (D C)
Published 25th Jan 2021
Like This?
Poems by Author
Comment
#anxiety #lust
All writing remains the property of the author. Don't use it for any purpose without their permission.
likes 1   reading list entries 0
comments 4   reads 49
Commenting Preference:
The author is looking for friendly feedback.
Re.  Chapter 4 part 6 A Submissive Female of New York City
chubbybuttcakes
26th Jan 2021 4:21am
interesting you wrote from a woman's perspective.

Read poems by nutbuster
Re.  Chapter 4 part 6 A Submissive Female of New York City
SweetKittyCat5
26th Jan 2021 4:44am
Wow.. that really heightened the relations of a Dom/Sub.. I love you are taking the time to bring forth the fetishes' most people would think yet, taboo to admit.. A very enlightening chapter my friend