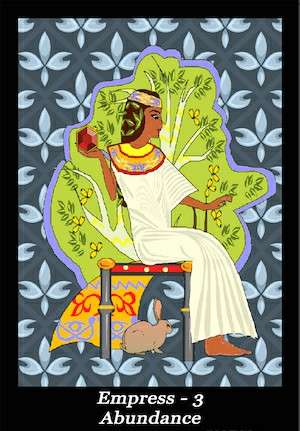 The Empress is representative of the productivity of the subconscious, seeded by ideas. She is meant to be the embodiment of the growth of the natural world, fertility, and what one knows or believes from the heart,

of the High Priestess, we move naturally onwards towards the Empress' sense of bounty and fertility. She is representing the Mother Goddess, fulfilling her part ...

objective expression (meaning density) in / of Life while theirs in the Sephira, lo' the Qabalistic Tree of subjective

Some one probably wrote: The Empress is the friendlier, more approachable aspect of the female archetype. ... This could mean great satisfaction, while in a improper context, when actually ...

This card traditionally represents devotion and passion. It is a higher intention "to expose” the ancient femininity of lower instincts on the altar of … or

it doesn't mean that at all but instead

The Background of The...

II. Analyze and describe the...

the symbolism just depends self context

as a Mother upon the world gives forth for the infant,

whilst the Cosmic Empress nurtures the Universe with the milk of Spiritual ...

signifies a strong connection with our femininity. Femininity translates in many ways –

3 The Empress – The Empress represents every kind of love, affection, sensuality, femininity, motherhood, fertility and creation. She …

is a creator, be it of life, of romance, of art or… While the Magician is the primal spark, … She

This could mean great satisfaction, but in a improper context, when actually more analysis is needed. The Empress can also stand for a reflective, emotional attitude, …

card of the Major Arcana, the Empress (3) represents feminine power, fertility, abundance, nurture, and the love of home and family. It's considered to be a ...

… meaning the empress is a creator, be it creation of life, ...

in Her Most General Manifestatio, the empress thoth tarot In

The readings begin with the Mother Aspect of The Empress ...

...know that a nightmare isn't real, how is it that we don't give the same meaning to the world around us?

The Empressis the third of the Major Arcana cards in traditional Tarot decks. ... In the Book of Thoth deck, she holds a lotus in her hand, associating her with ...

On both cards the empress holds a shield with an eagle on it. ... spiritual meaning is only clear when we study the entire

Visconti-Sforza deck, and when in ... The Thoth Empress is also full of symbolism

Without creativity so much becomes merely mundane.

Written by MyLadyCharlotina
Published 19th Jan 2021 | Edited 20th Jan 2021
Like This?
Poems by Author
Author's Note
Image, Lucid Tarot
Comment
All writing remains the property of the author. Don't use it for any purpose without their permission.
likes 0   reading list entries 0
comments 2   reads 30
Commenting Preference:
The author is looking for friendly feedback.
Re. We're all made of stars.": Recap: Tarot-3-The Empress -
TheGiftedOne
20th Jan 2021 3:42am
I had tarot cards drawn for me once. This is one of the cards I drew. I didn't really know what it meant so thank you for explaining it.

Re: Re. We're all made of stars.": Recap: Tarot-3-The Empress -
MyLadyCharlotina
- Edited 22nd Jan 2021 11:58pm
22nd Jan 2021 11:54pm
So much of what is there to "understand" depends on what the reading is for..Is it character analysis, ornisnjt divination, or is it concrete magic, and how serious or fun or what all is it of any of those. Varying levels of approach and symbolism are then applied. The symbolisms start out from a very simple base and move upward into complexity, if one wishes for that. One applies such symbolisms as one knows about the card, or can grasp from the imagery, applies it to ... dot dot dot ... some🤷‍♀️ thing...? *within?* Within what? Within the question, i suppose...

Tarot is a game of intuition, or a game played *with* intuition, or, one could call it a tool of intuition; but both words' meanings go to far in their own respective directions and not far enough in a host of others to really encapsulate it. I think I'll call it a "thing" of intuition, which conveniently enough for me as a magician leaves open the possibility of tarot having its own agency, or, if of a sort – however much of it I wish to grace it with in my imagination – and leave it at that.

Imagination is what makes tarot more or less easy to work with, because one is working with a visual imiagry which starts out from a base of fairly simple symbolisms. I use the Radiant version of Rider-Waite a lot when i'm playing.

Each card is a story unto itself, and a part of the greater story of the deck at the same time. Parables and allegory and all that.